×
You are here: Home / Recipes / Crunchy Nacho Burrito Taco Cups + Video (aka I got a new camera!)
Jump to Recipe - Print Recipe 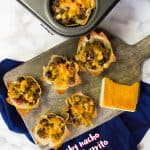 Call them what you want – nacho cup, burrito cup, taco cups. But this is deliciousness in a cup. 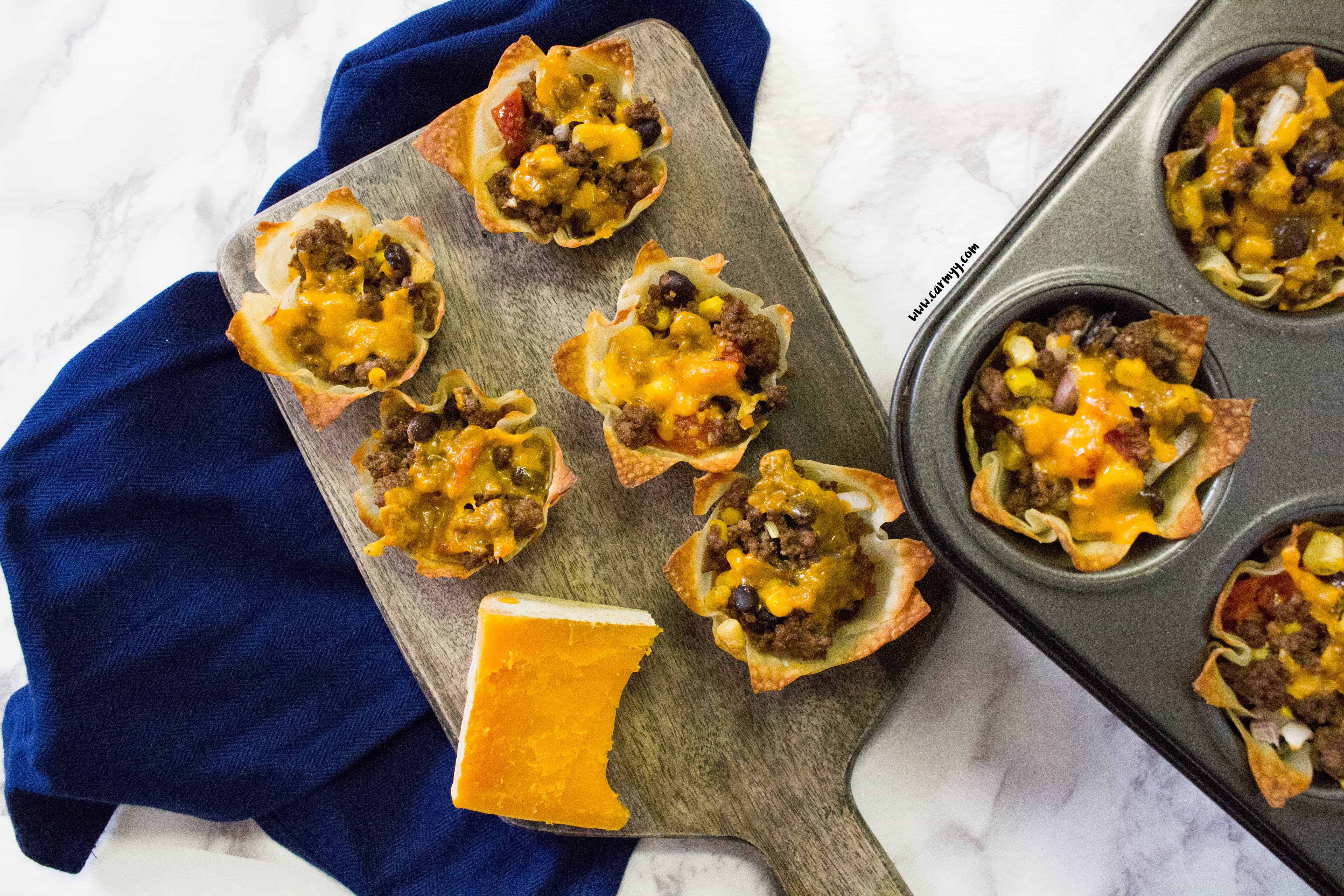 On New Years Eve, Sport Chek gifted me tickets for me to watch my first live hockey game ever! It was the World Junior Championship, Canada vs USA, and boy was I excited. I had a blast watching the game and of course, I had a blast because of the food! There’s something about a live sporting game that makes popcorn, cotton candy, and nachos taste ten times better. However, I only got the popcorn and cotton candy portion as H and I had grabbed dinner beforehand so we didn’t get our nacho fix. (Also, can we just take a minute to gawk at the fact that my bottle of Iced Tea was $5.75?! $5.75!!!! Ugh. Moving on.)

Then on Monday (yesterday), my brain went a bit wonky. I had thought that it was Tuesday so I went for a run then got ready to go to work. I was scheduled to work an 8 hour shift which meant I was super excited since it meant I was going to be able to get Chipotle for lunch. Of course once I got to work, I noticed that the entire work room and front area was empty. Like dead empty. Standing in the middle of the room confused and concerned, I pulled out my phone and checked my email to make sure I wasn’t walking into a fire drill. Seeing that my inbox was empty, I was even more confused….until I realized it was not Tuesday but Monday so we were closed. Oops.

TL;DR? I wanted nachos and Chipotle and sadly did not get it. Since I went all the way to work, I decided I might as well get my grocery shopping done. And that’s when this idea was born! I was craving nachos and a burrito so I decided to combine it all into a bite size snack that’s perfect as a game day appetizer. A taco cup. A burrito cup. A nacho cup. A delicious cup! 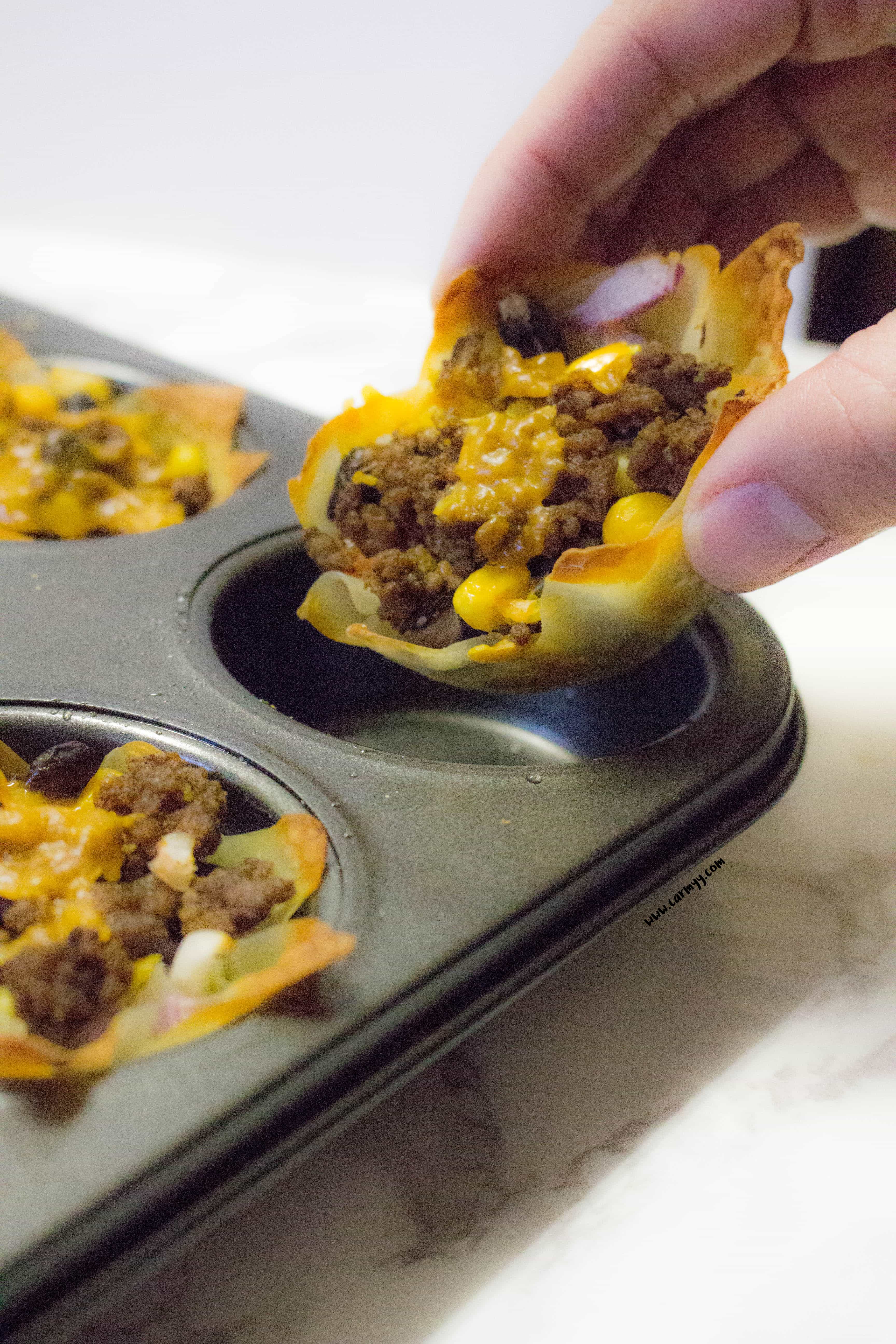 I’m sure there’s a similar recipe somewhere out there but I decided to grab what I (and H, he loves onions!) liked best about nachos and my burrito from Chipotle and combined them together. I bought wonton wrappers, diced tomatoes, corn, black beans, onions, and cheese! I tried to keep the cheese on the lighter side since I kind of ate a ton of cheese over the holidays…oops! Also, I didn’t have an sour cream or guac at home and honestly didn’t want spend the money on the sour cream since every time I purchase a tub, I never finish it and it always goes bad! It makes feel so guilty about wasting money so this time I just skipped it. As for the guac, I was just plain lazy – there I said it. I just wanted something simple and quick so making my own guac was out of the picture. 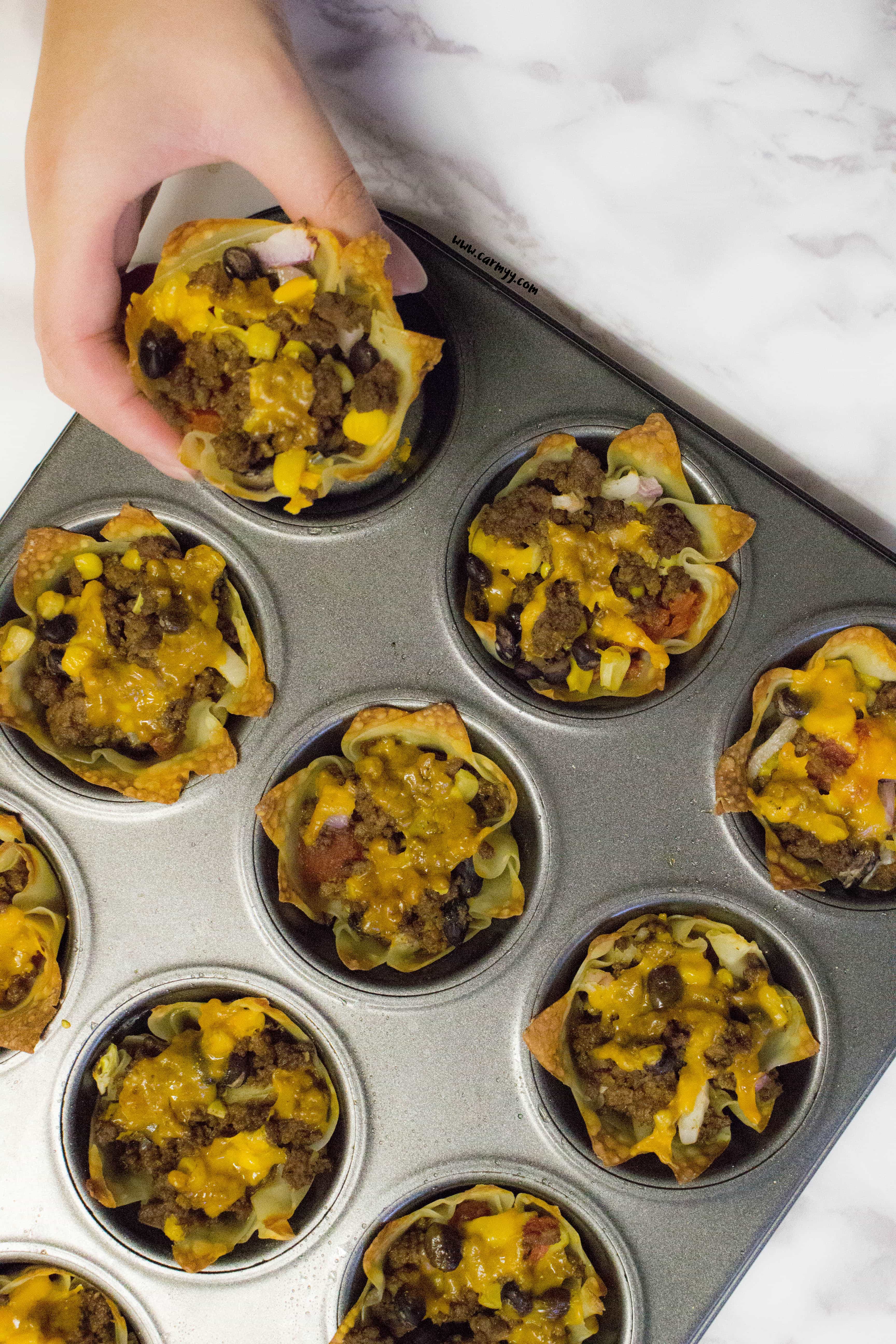 Over the holidays, I got myself a little gift in the shape of a Canon Rebel T5i. I was testing it out with this recipe and I was testing out shooting raw with this recipe. I’m still trying to get the colours right in Lightroom since raw is making the photo look a bit dull. I also tried to shoot a video for this and well, after I uploaded the files onto my computer, I realized it was out of focus! Welp. I am not catching a break here am I? First showing up to an empty work place and then a blurry video! Anyways, I thought I’d share it anyways because this is a judgment free zone so Imma upload my blurry video if I want to! Hahahaha. #someonepleasehelpme

Honestly, if you’re still with me after all this rambling, I kind of love you! I should probably share the recipe now shouldn’t I?

Call them what you want – nacho cup, burrito up, taco cups. But this is deliciousness in a cup.
No ratings yet
Print Rate
Prep Time: 15 mins
Cook Time: 15 mins
Total Time: 30 mins
Servings: 24 cups

I lined the tin with two wonton sheets each because I was worried that one might not support the filling.  You can fill the cups layer by layer or mix all the ingredients into a bowl before scooping it into the tin. I did it both ways and the results were pretty much the same.
Tried this recipe?Did you make this recipe? I'm always so happy to hear about it! I'd love to see how it turned out. Tag me at @CarmysHungry on Instagram so I can see it! If you enjoyed the recipe, I'd really appreciate a comment with a 5 star rating! ♥
Authour: Carmy
Course: Side Dish, Snack
Cuisine: Mexican

QOTD: What happened when you got your dates mixed up? What’s your favourite game day snack? How else can you use a muffin tin?

[Tweet “Crunchy Nacho Burrito Cups + (out of focus) Video aka I got a new camera!”] 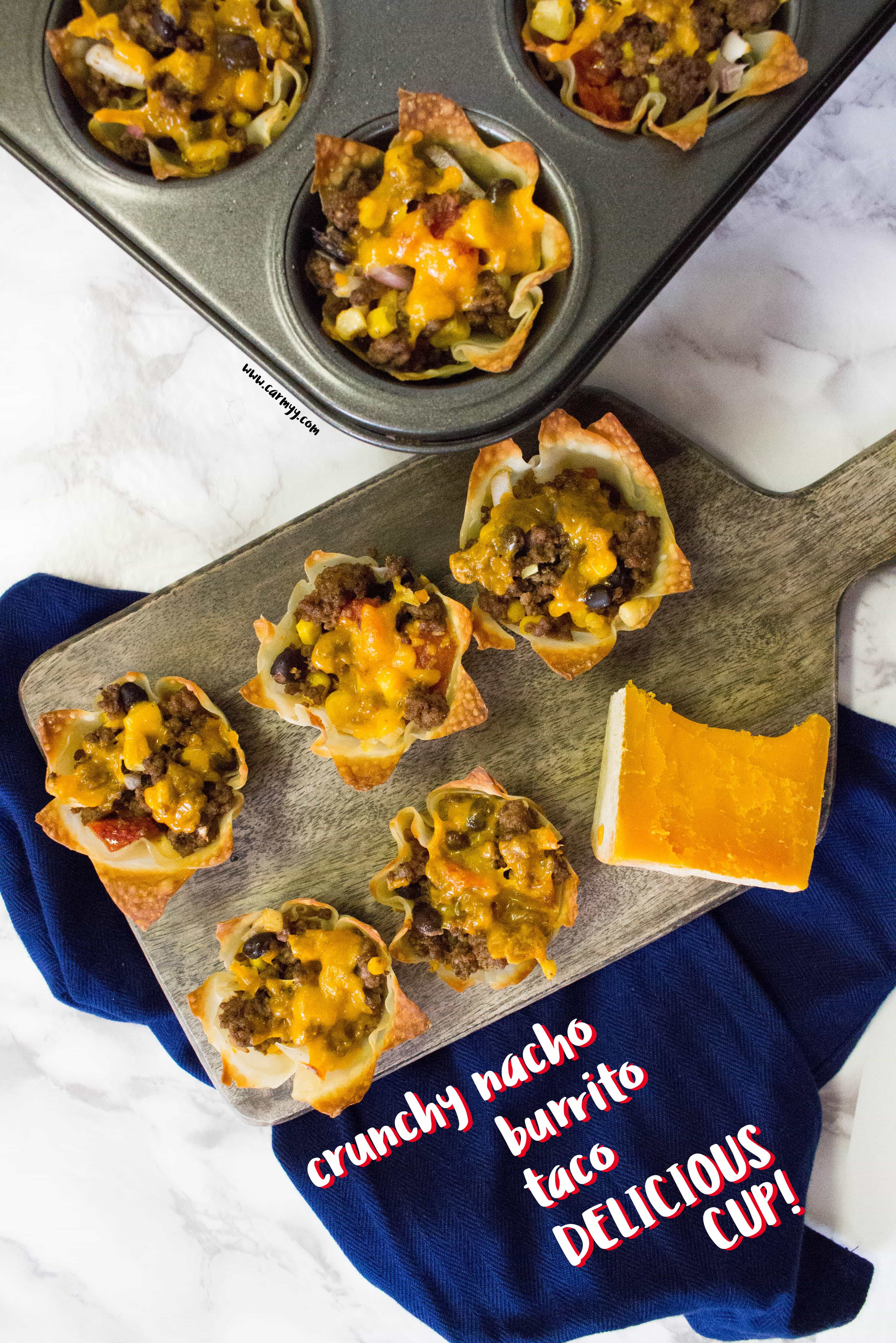 Annnnnnd here’s my out of focus video that I’m sharing because I’m all about learning from my mistakes and hey, now next time you shoot a video, you’ll remember to turn on auto focus or your video will turn out like mine LOL.