Disclaimer: this race was generously sponsored by Burnbrae Farms 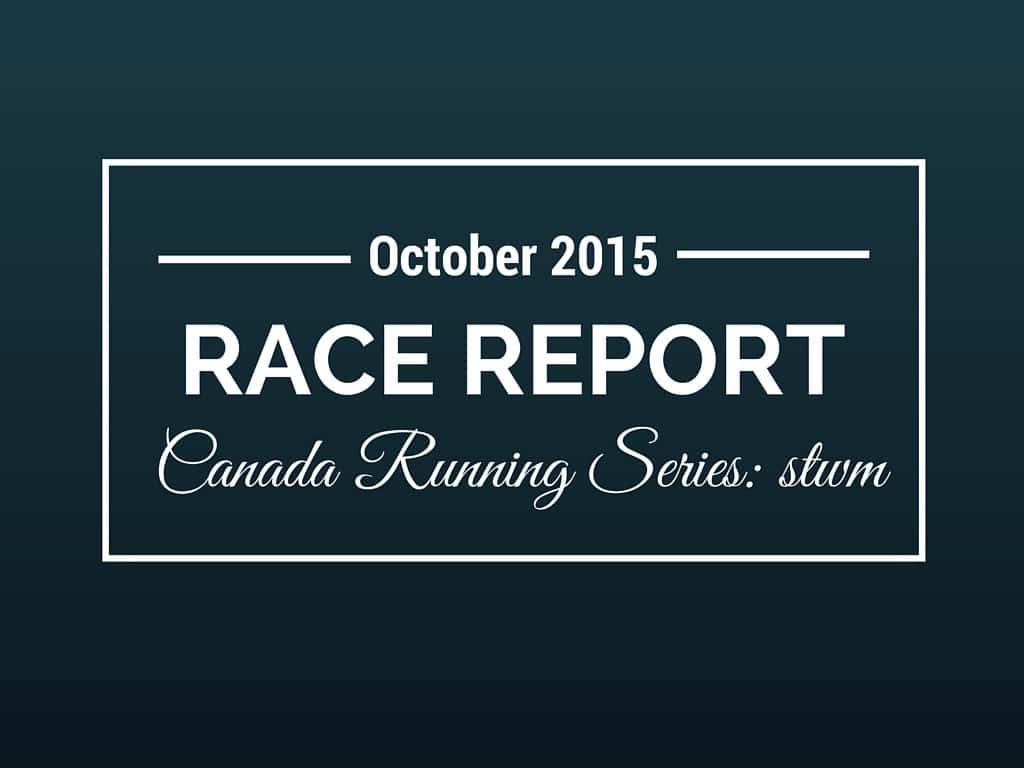 It wasn’t easy getting to this day. STWM was my original goal race of 2016 – I had been looking forward to it since last year when I PR-ed 2:00:58, missing my goal by 59 seconds. I had spent all winter base building for this and it was extremely heartbreaking when I had to pull back and not race it.

I had started the season with shin splints and ITB issues. Powering through that, I ended up getting an infection which took me out 3 weeks due to the antibiotics. Then I found out I had a broken butt (my glutes were not pulling their weight and I had to go to physical therapy to try to activate it).

At this point, most of my base building was gone, I had zero double digit runs from June to the weeks leading up to STWM.  If you’ve been following me on my Monday on the Run, you would know that my Sunday long runs leading up to STWM were my first double digit runs at 10K, 15K, 20K, and then 11k. Can you believe that? Because I couldn’t! I was sitting at home a month out going “how am I going to run 21.1K when I barely run over 9K per run?!”  Needless to say, I was nervous going in. Luckily, my goal was only to finish – nothing big, fancy, or difficult. 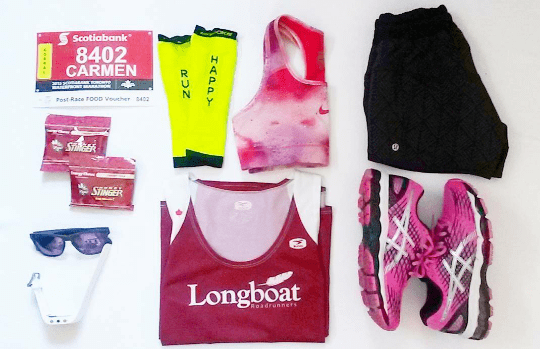 “It was going to be a cold one” – was what everyone was yelling about and what the weather app kept telling us but being young and stupid, I went with my singlet, arm warmers, shorts, calf sleeves, and then (not pictured) a t-shirt because my singlet is actually super thin. People were showing up in their winter gear and I was literally standing around like “I’m not crazy, I swear!”

Morning of the race, I slept maybe 4 hours and was just ready to go get it done! I met up with Morgan (Wildly Fit), Janice (Fitness Cheerleader), and Phaedra (Blisters and Black Toenails), my co-Burnbrae Farms Ambassadors and got a little photo op in! 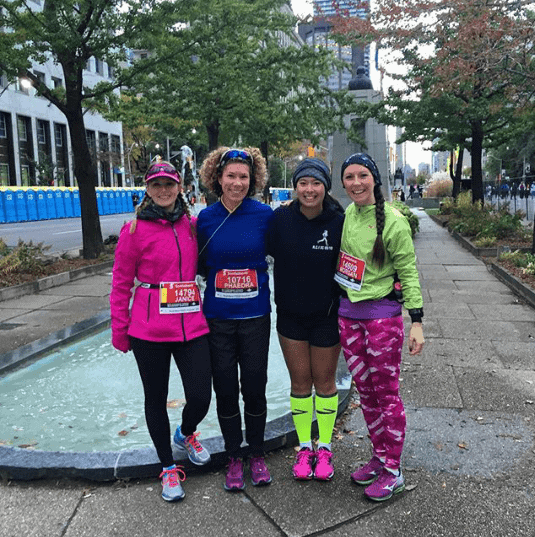 I also got to meet up with Rebecca again along with some other friends! 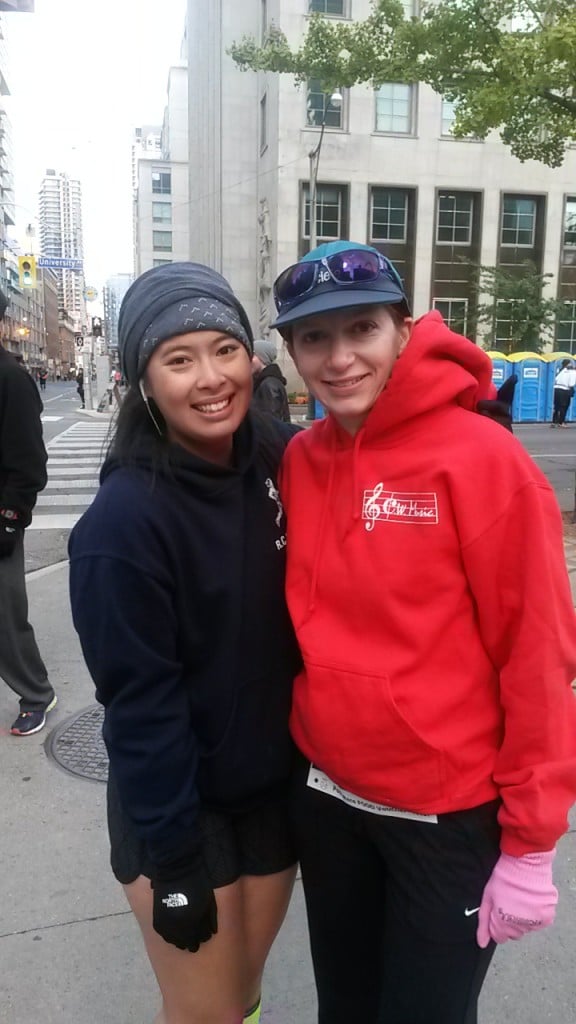 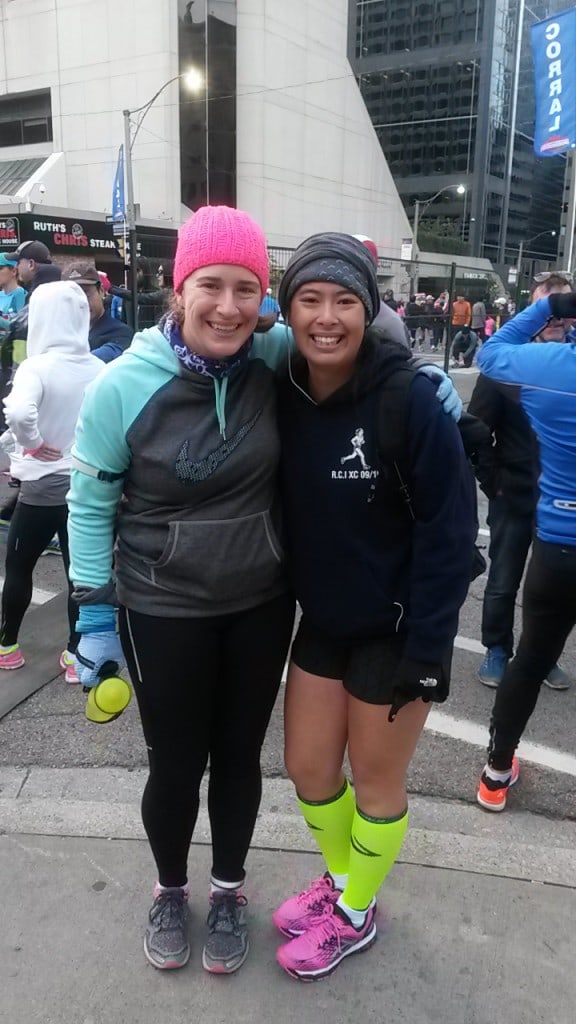 I was doing pretty well – I started off very even and was following the plan of staying at 5:50 for the first 15K. I didn’t want to die, I felt strong, and I was happily coasting along. I wasn’t too worried as I knew my friend and teammate Robert would be waiting for me around the 3k mark to pace me through the race. 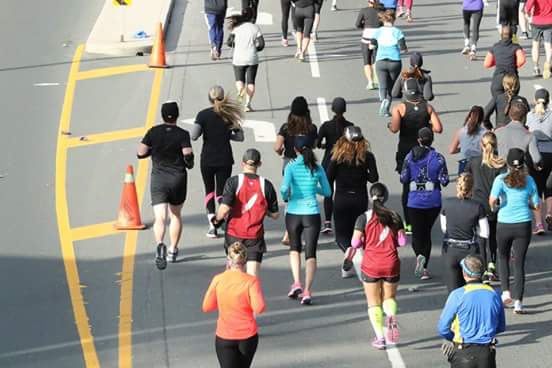 It wasn’t bad, there were some slight inclines here that I was not too happy about but I pushed through. I followed Robert as he chit chat at me while I tried my best not to cry because I really hated the inclines.

What goes up has to come down right? Well the downs really was not enough, in my opinion, to compensate for the up because here’s where it got ugly. Down right ugly. Around 14K, I started to crack. I was literally yelling about how much I hated it and how I never want to run again (HA! Yeah right, I’m already planning my next race), and was on the brink of tears. I had to tell myself to get my act together because gasping for air while crying is just going to make me cramp up and I had less than half of the race left and I needed to finish it. The incline at the 14K was just so unbearable that I really wanted to just give up and walk because it’s not a goal race – I just needed to finish. But Robert was there and Robert was pacing and Robert was not going to let me stop (major thanks for that). There was no way I was going to make Robert walk beside me while I cried so I sucked it up and kept moving. 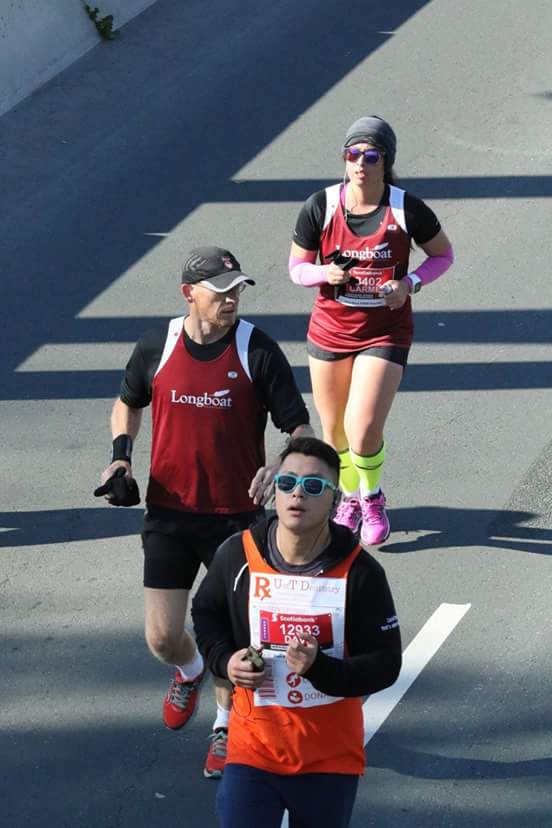 I was angry – angry that once again, that incline had bested me. The same incline last year that slowed me down and caused me to miss my sub 2 goal. I was just so tired at this point that when I saw the final incline that led to the underpass where the full and half marathons split up, I was ready to stop. My feet were hurting, my back was tired, and I felt awful. (Actually, my feet were hurting quite a bit because my previous pair of shoes had to be retired earlier than planned so the shoes I wore for my race, I had purchased the week before and only had 3 short runs to break them in. Lesson of the year: Have backup shoes ready to go!)

I really did want to give up but runners passing by could hear Robert encouraging me not to stop and struck up a conversation with us (mainly him, I was too busy trying not to die). It actually helped to be behind them listening to friendly chit chat and it helped me focus less on the pain and more on putting on foot in front of the other. Luckily there were some kids along the race too, waiting for high fives. I can never say no to kids waiting for high fives, so I tried my best to keep going (and high fiving them along the way).

By the last 1K, I was almost out of gas but I wanted to finish strong. I had picked up the pace and according to my friend who saw me near the finish, looked VERY miserable (I totally was). Running through the chute was honestly the best feeling ever as the last 500m, I was starting to fight a bad calf cramp. I was finally able to stop and was pretty much carried to the medic tent because my calf just wouldn’t let up after that final sprint.

I was miserable. I spent 2 hours in the medic tent and by the time I had stopped crying and my calf finally let up so I could walk again…. the half marathon baggage check was no where to be found! I walked towards what I thought was baggage check but turns out it was just for the marathoners. I was told it was on the other side of the plaza so I sadly limped over. When I got to the other side, volunteers told me it was actually behind a building so off I went limping – cold, angry, and really hating that my first experience with baggage check for STWM was a freaking pain in the butt. By the time I got to the back of the building, another volunteer had to point me ACROSS THE STREET for baggage check.

By this time, I was on the verge of tears – I was cold, hungry, and in pain. I was actually crying when I asked a group of men by a truck if they were baggage check. I just wanted to go home and when I FINALLY found baggage check, I was just so happy I had my clothes, I didn’t bother making the long trip back to the plaza for a freaking bagel. I understand that I was one of the last to get my baggage but taking down the signs made it extremely difficult for me to get to my stuff (and just made me angry).

For 3 years, my fall race was STWM and next year, I don’t think I’ll be returning. I absolutely hated the incline. “Flat. Fast. Festive.” is their tag line and I always fall for it thinking that the incline really isn’t that bad but every year, I suffered on it. I just think that STWM and I are due for a break and maybe one day, I’ll come back and crush the inclines. However, after my experience this year, I really don’t want to risk having to relive it.  I know a lot of my friends had an absolute blast running it so don’t let my recap deter you from giving it a try! I mean, I did run the course 3 times.

The course wasn’t exactly scenic for anyone looking for a beautiful race course. It’s in the city, on highways, and pretty plain. The full marathon might be different but the half is pretty simple.

Also, the swag bag included: Neutrogena Healthy Skin CC Cream in shade fair to light (did everyone get a same shade? I’m not exactly fair to light…), a single serving of Love Grown Foods’ Hot Oats, iRun Magazine, Get Outside Magazine, and a single packet of Deep Relief cream. There was a virtual goodie bag too but nothing really “wow-ed” me. 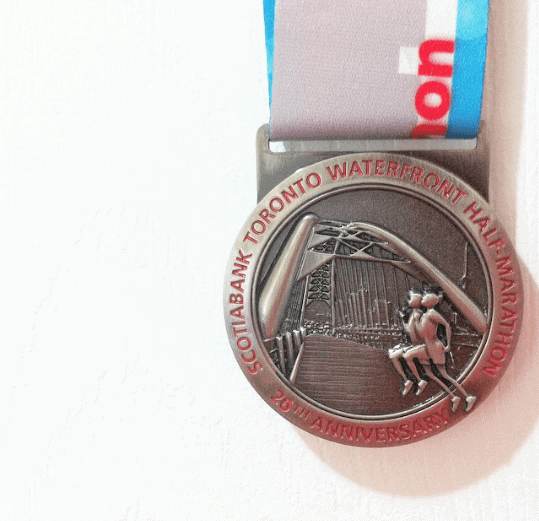 Were you there? How’d it go? Do you like racing half marathons? Ever spend some time in the medic tent? 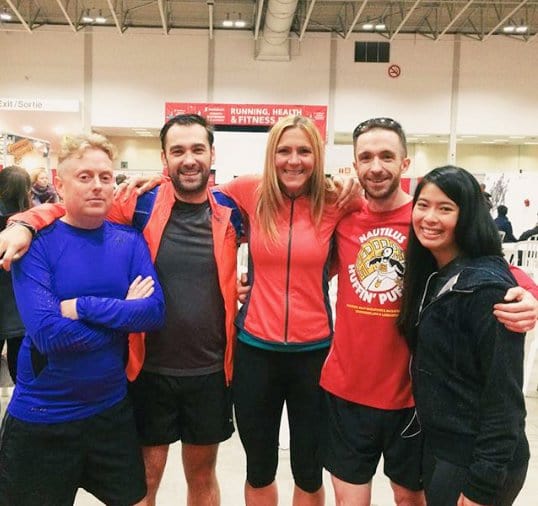 Carmy is a healthy-ish living blogger based in Toronto. Here you can find healthy-ish meal prep recipes, Instant Pot recipes, and lightened up family favourites! Follow along on as she shares what she learns along the way! Read more →

Click here to check out her Meal Prep: Learning the Basics ebook.