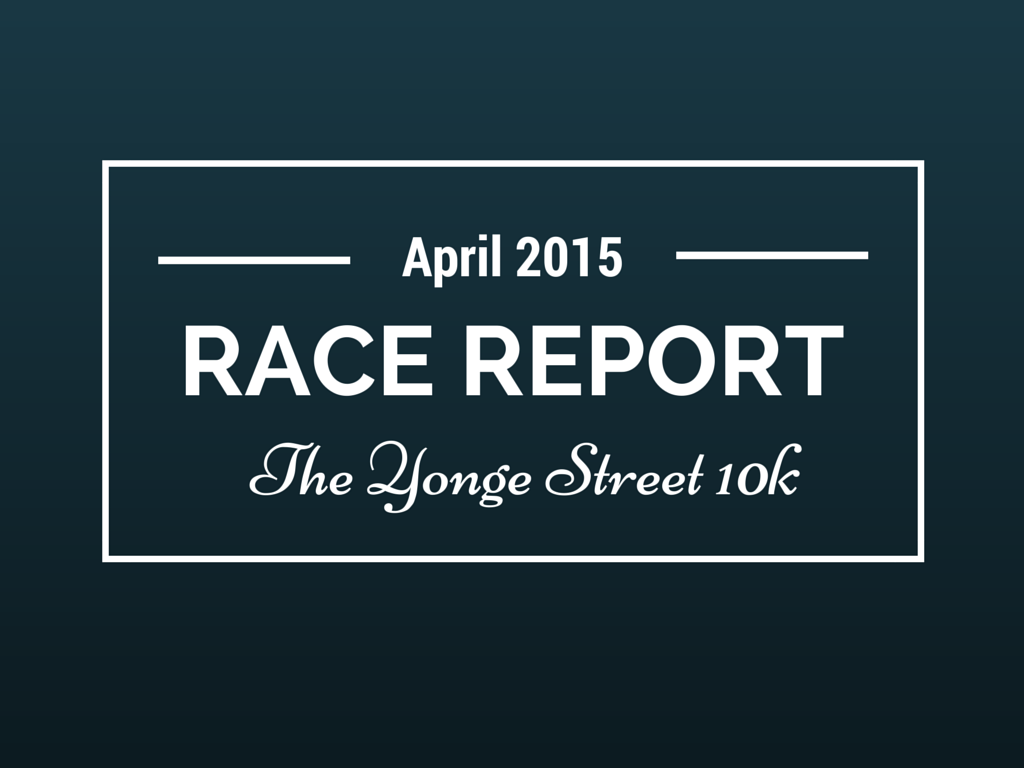 This was the first race I had where I went in with an injury and had decided to run it “for fun” (unlike when I was recovering from an injury in October’s half marathon and I still raced it, trying to hit a PB). I was pretty excited for the TYS10K because the day before, it was 15 degrees in the morning! 15! But unlucky for us… it dropped back to 8 degrees the morning of the race. Mother nature can be cruel! 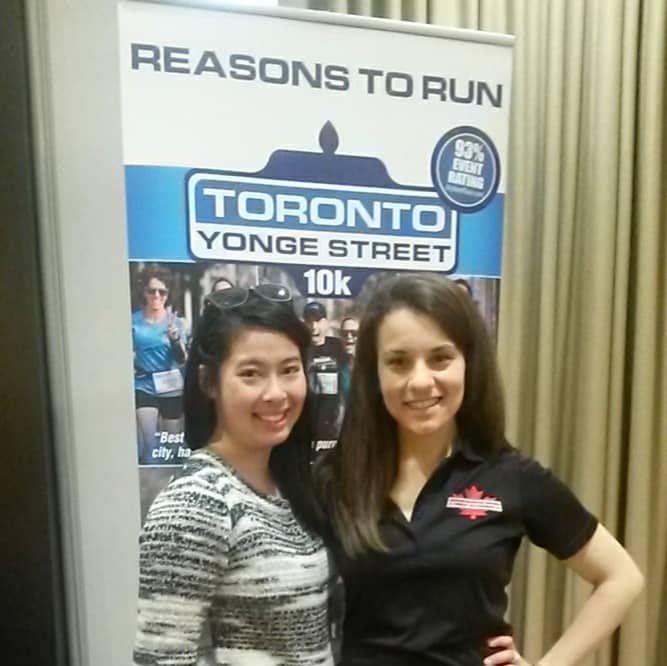 My oh my… to be very honest with you, life has gotten in the way of running for me in the months leading up to this.  If you’ve gone through my Monday on the Runs, you would notice the trend of me missing my training runs or having them shifted.  Another thing was my shins were just not happy with my throughout the training season so for a while. I wasn’t very consistent. Some Sundays I was able to knock out a 15k long run but others, 12k was difficult. So after a week of hemming and hawing, I changed my goal from a sub 53 PR to a sub 60.  My coach from Longboat, Steve, had fielded multiple emails from a panicked me so props to him haha.  He suggested that I go the first 5k at 5:30 pace and just go from there with would have put me at 55 minutes which I was fine with.

This year, I was able to get there nice and early because as an digital champions for the race, we had to be there early to get our group photo.  It was very fun meeting up with my fellow digital champions and finally meeting my Twitter friends for the first time!  Ladies like Cathy, Melly, and Karyn! It was quite fun being able to squeal, hug, and selfie before a race for once instead of pacing anxiously back and forth while questioning my race plan.  It was also fun as we were all able to hang out together at the start line (and all finish within a few minutes of each other!) 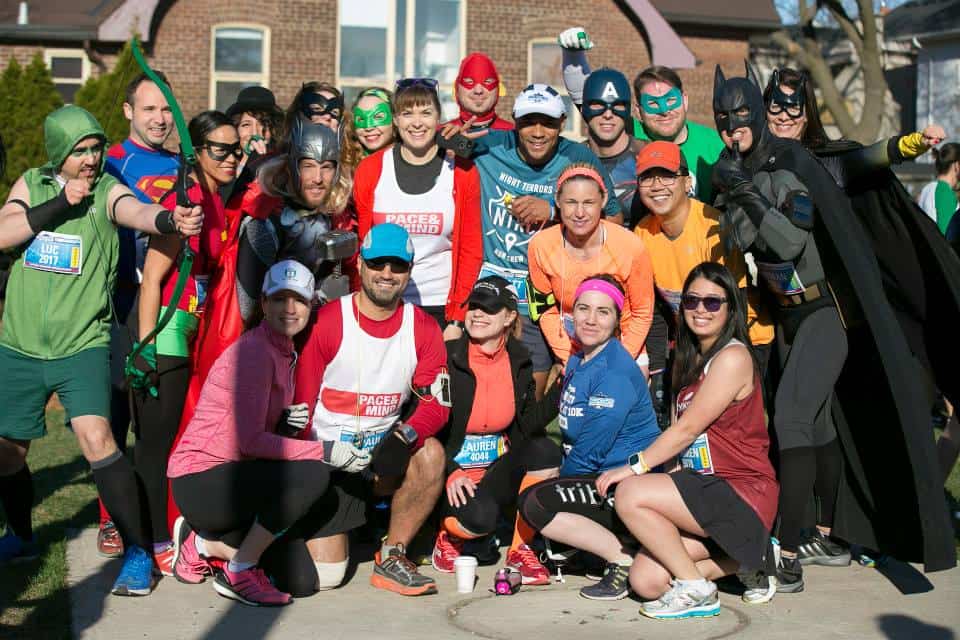 Anyways, when the race started, I felt pretty good (that or because it was totally downhill right away so we were all just zooming down)! Nothing was hurting but holy smokes was it windy!  I was blown left, then right, then went against some headwind.  There was a point where the wind hit us all so hard that the large group around me all like out a resounding “whooooooa!” I totally tried to draft off people but it didn’t work.  Wind was hitting me from all around so I gave up on that pretty quick.

This part is actually a little embarrassing haha… by the 2nd half of the race, my right side was starting to feel funny.  There was a good chance that it was due to my shoe being on for too tight. I’m not too sure but my right foot started to feel numb/tingly and it spread up to my calf.  Of course, I didn’t want to stop and adjust because I’m stubborn and in my mind it was “only 5 more k, suck it up girly.” So I powered through… I mean, it wasn’t going to kill me right?! Yes. I’m crazy haha.

Anyways, when my watch told me I was 9k, I decided that it was time to book it.  I still had quite a lot left in me at that point so I picked it up.  I was so happy when my watch beeped 10k and it said 52:5x which would have been a PB for me on the course but as I looked up, I saw that there was quite a bit more to go!  I saw the bridge and I was like “oh crap… we are nowhere near doneeeeee” and I didn’t want to drop my pace so I kept going (less enthusiastic because my watch said 10k! I should have been done! I want my banana! Haha).  However, my mood was lifted as Karyn came up behind me and wanted to finish together. I was totally onboard since Karyn had wanted to run a hard race so there was no way she was going to take it easy at the finish – just what I needed to keep going.

So we gunned it.  I saw the finish line, called out to Karyn, and we sprinted to that beautiful chip timer mat! Woo! It was over! It took me a minute to kick off my shoe and my right foot and calf was so happy to be free!

I was happy.  I was surrounded by runners who I had gotten to know over the last few months online and a lot of them had PB-ed and their afterglow was amazing. Despite not going for a PB, I kind of got one so that made my day too. An unexpected PB is still a PB in my books!  It mades me wonder how I would have done if I was able to run hard throughout the whole thing and now I’m excited to work hard for next year to be injury free so I can leave everything I have on the course. 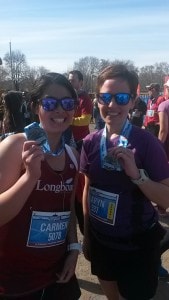 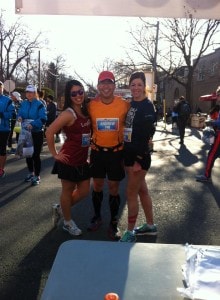 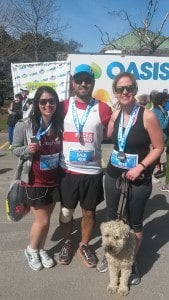 So were you one of the thousands of runners sprinting down Yonge Street last week? Or were you running elsewhere?