Germany’s capital city is one of the most affordable European capitals to visit. That said, the exchange rate can still make it a costly vacation, so down below is a round up of some free things to do in Berlin. From history to food, to music and nature, Berlin packs a lot of activities for visitors. 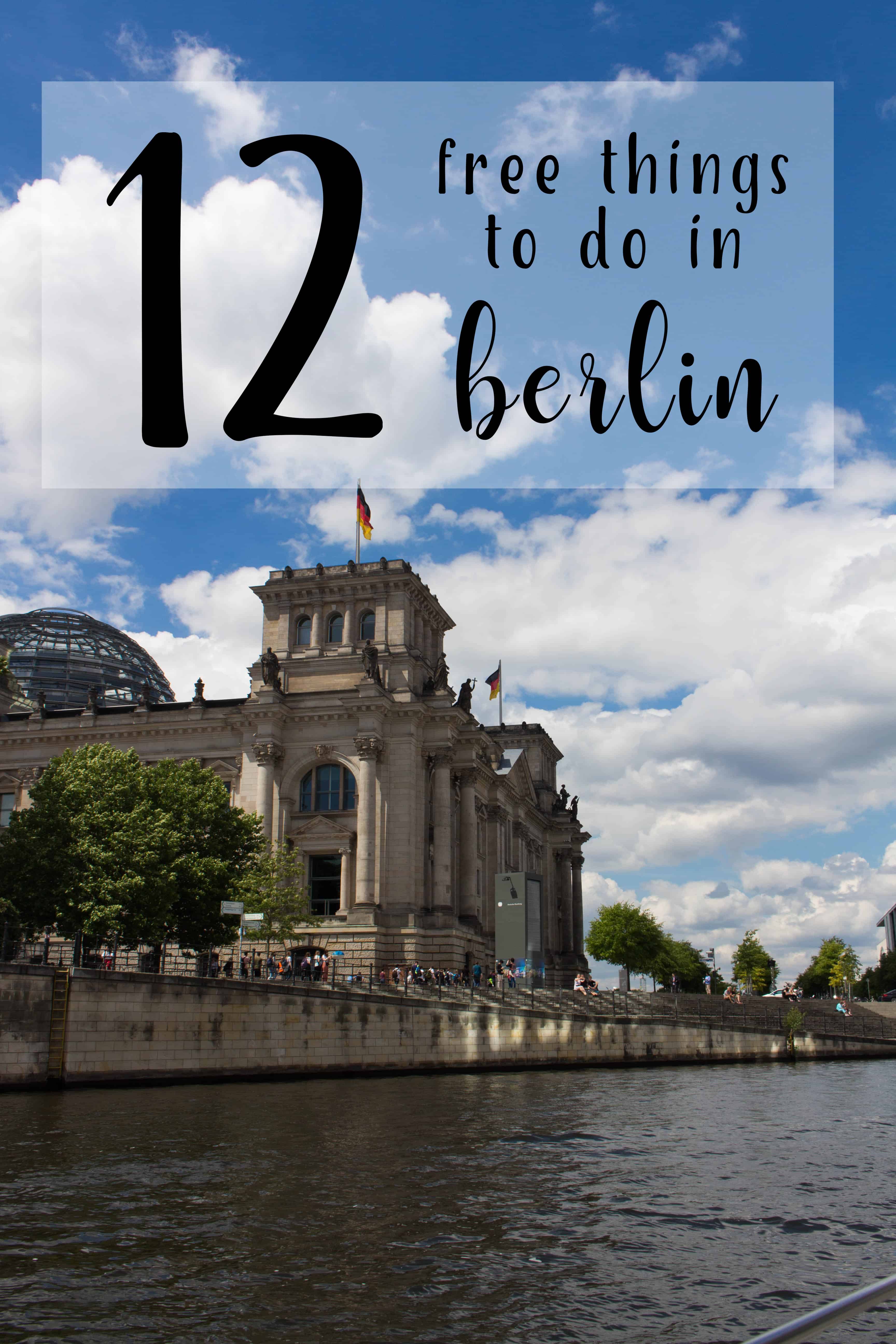 12 Free Things to Do in Berlin

The Reichstag is a government building which houses the German parliament. With the Brandenburg Gate on one side, and Tiergarten on the other, it is centrally located in Berlin, and easy to access. Atop the Reichstag is a huge glass dome which offers generous views of Berlin. While you can visit the dome for free, you will need to register with passport details, which you can do online in advance of your visit. Upon arrival, you’ll receive an audio guide for your tour. Views from the dome are excellent any time of day, but especially as sunset as the city starts to twinkle.

In relatively recent history, Berlin is famously known for the Berlin wall which divided East and West Germany from 1961 to 1989. The wall extended for 96 miles, 27 of those within the city of Berlin. Nine years after the wall came down, the Berlin Wall Memorial was established, along a 1.4 kilometer stretch. There is a large outdoor area, a viewing platform and indoor exhibits, all of which are free to the public. 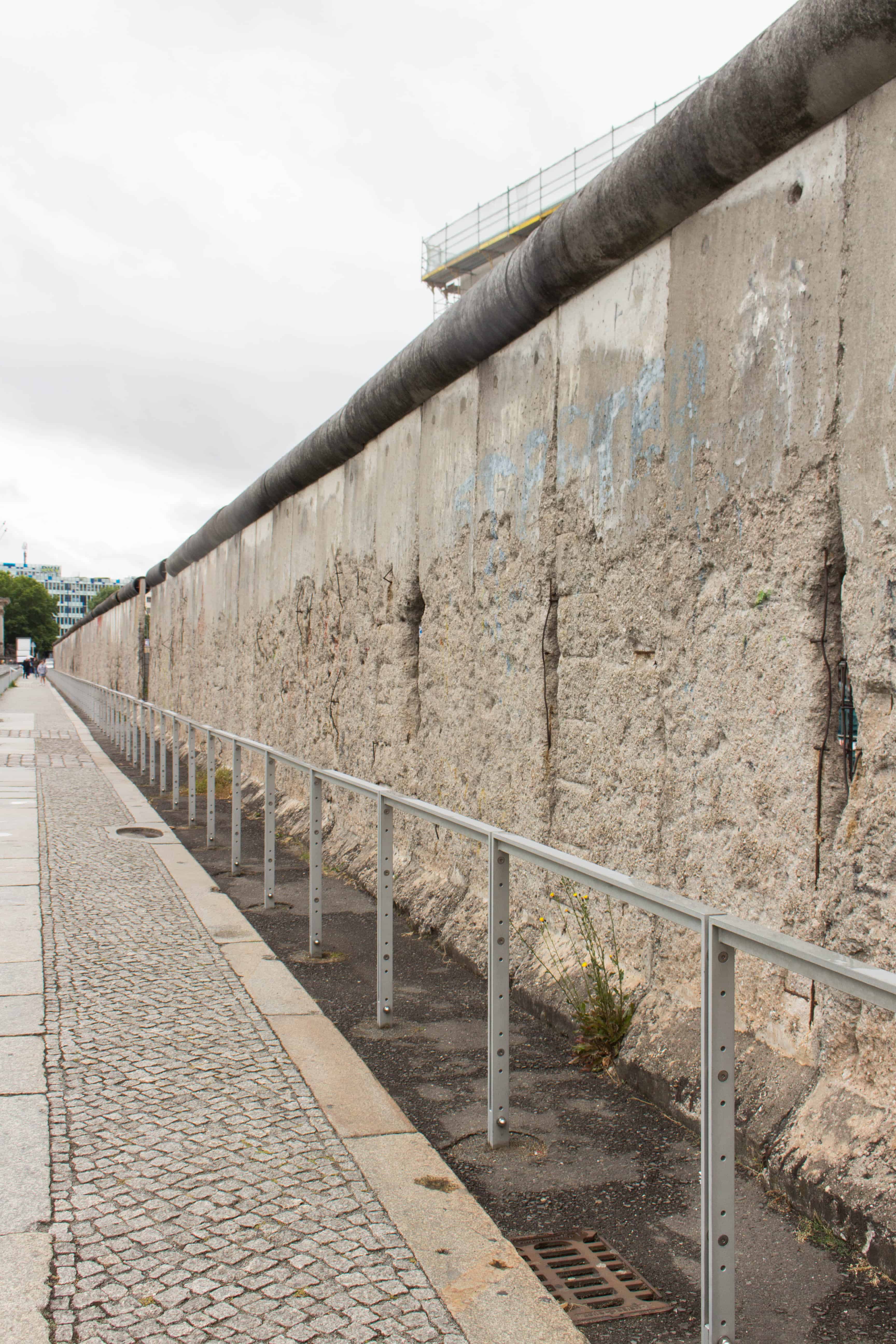 The Topography of Terror is a history museum located at the site of former Nazi headquarter buildings. The museum is dedicated to displaying the reign of terror from the SS and Adolf Hitler during the Third Reich. Starting with Hitler’s rise to power, through the horrors of the Holocaust and through the end of WWII, the museum tells the story largely through photography exhibits, with German and English captions. Photos are displayed both outdoors and indoors, as well as a piece of the Berlin Wall outside. Special tribute is paid to the victims and survivors of the Nazi regime.

Another part of the Berlin Wall that is interesting for visitors is the East Side Gallery, which is a series of murals painted on the remains of the wall. There are 105 murals which were painted in 1990. Berlin is well-known for street art, so this open-air gallery is an interesting mix of history and art. It can get quite crowded, but if you love to see street art, don’t miss Berlin’s East Side Gallery. 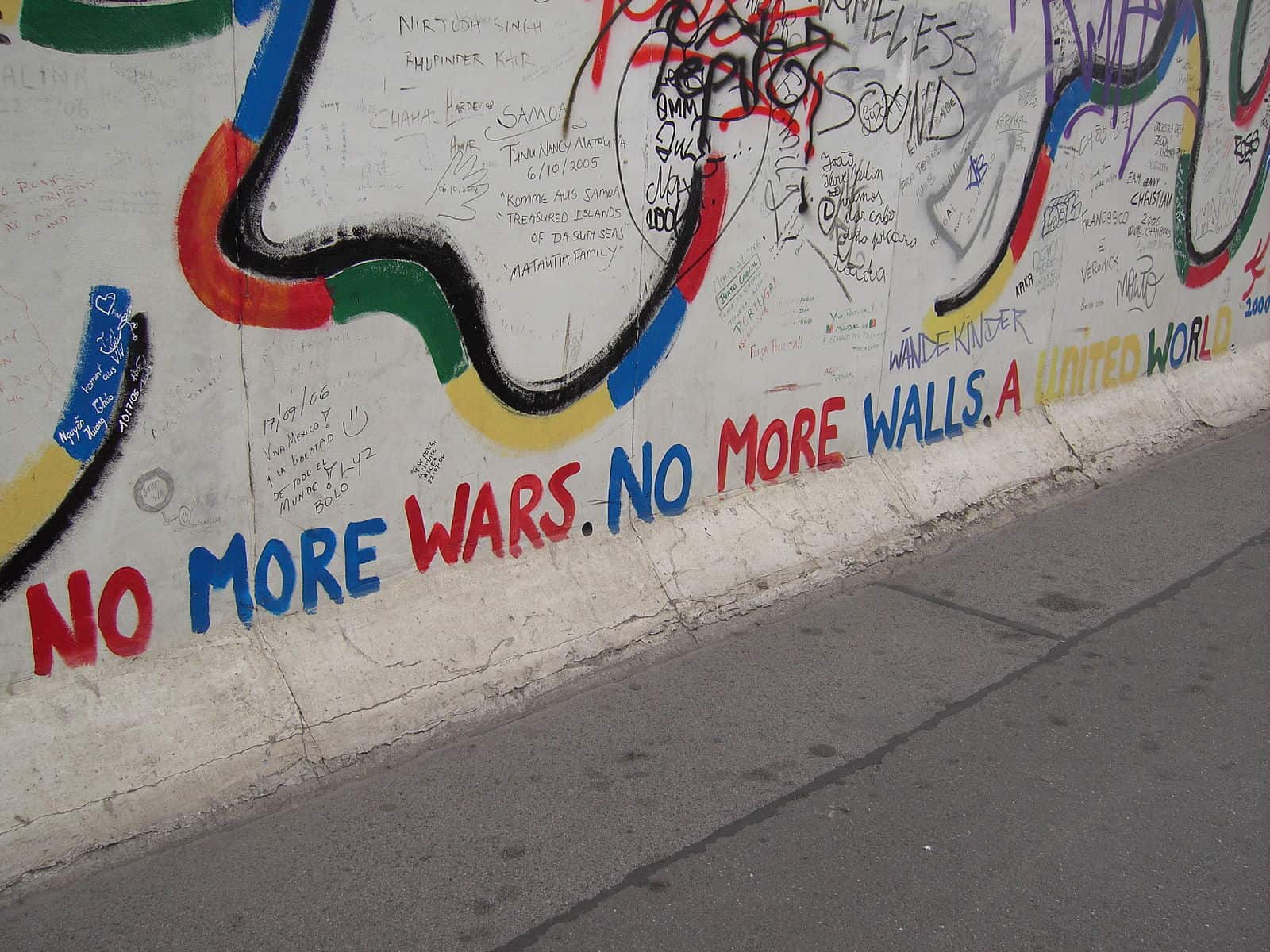 The Brandenburg Gate is one of Berlin’s most famous landmarks. The Gate was built in the late 18th century, then became a part of the Berlin Wall, and today is a symbol of peace and unity. It’s a popular spot to take photos, especially at sunset when the sun aligns with the gate. At night, the monument is lit up, which is also a very photogenic time to photograph the gate. It’s also within walking distance of the The Memorial to the Murdered Jews of Europe.

The Memorial to the Murdered Jews of Europe

The Memorial to the Murdered Jews of Europe is something you do not want to miss. Built in 2004, the site is 4.7-acre and is covered with 2,711 concrete slabs or “stelae”, arranged in a grid pattern on a sloping field. Underneath the memorial is the Place of Information. The Place of Information is free to enter but you must go through a metal detector. 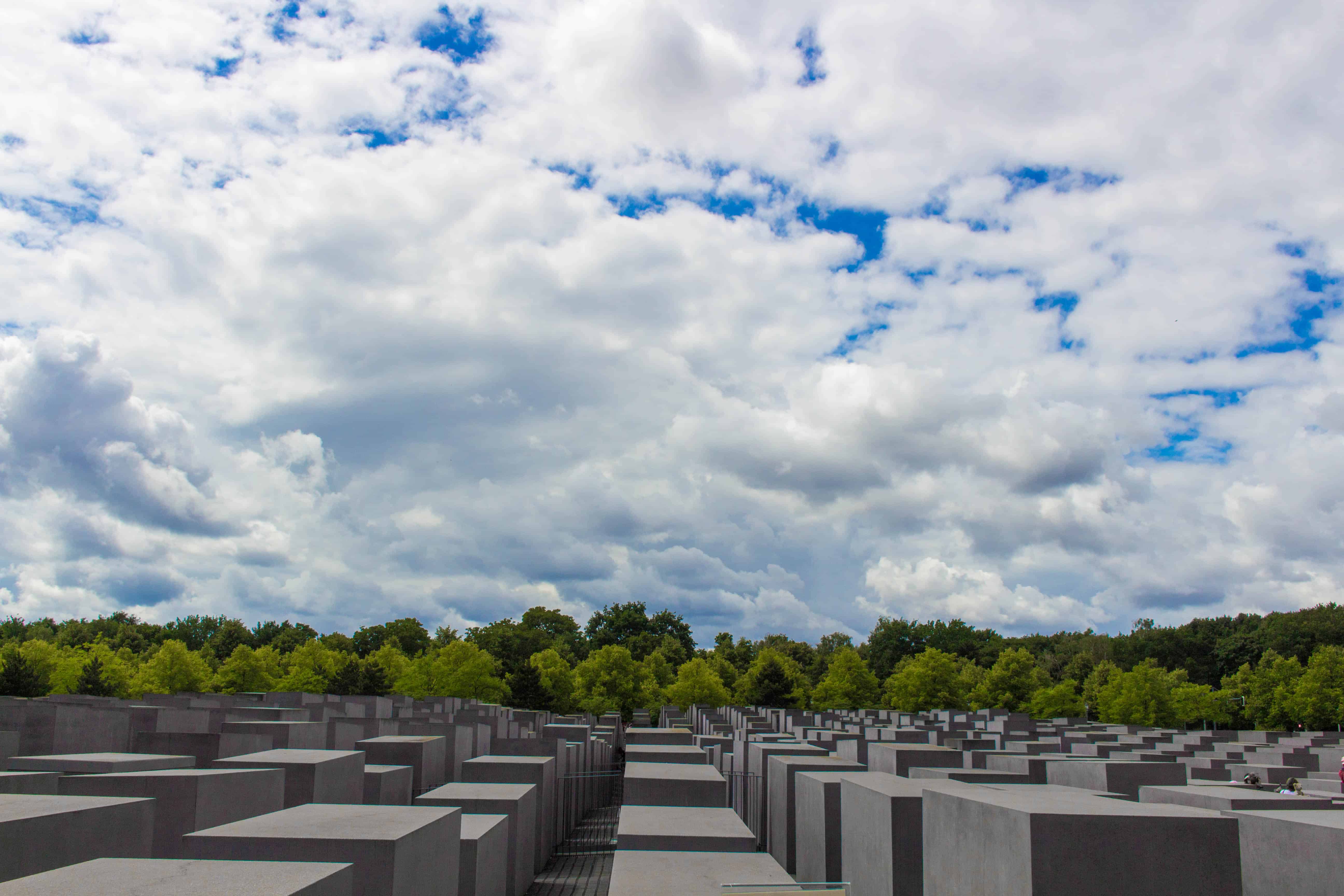 Foodie travelers in Berlin won’t want to miss a visit to Markthalle Neun. The market began back in 1891 and was recently revived as food halls gain popularity across Europe. It’s free to wander, but you might want to bring a few Euros to try some of the delicious food you’ll be smelling along the way. Thursdays are especially popular with “Street Food Thursday.” At Markthalle Neun, you see food from so many cultures, including Korean, Tapas, Japanese, Italian, American, German, etc.

Mauerpark is located on the north side of Berlin, in the Prenzlauer district. Mauerpark offers many activities every day of the week, but on Sundays, thousands flock to Mauerpark for Bearpit Karaoke. You can participate in the karaoke (bring a thumb drive with your song) or just go along for the entertainment. This is completely a grassroots effort from a man named Joe Hatchiban who supplies the speakers and microphone for anyone who wants to participate. There’s also a popular flea market on Sundays, so be prepared for crowds!

For a more professional musical experience, the Berliner Philharmonie offers free performances at lunchtime on Tuesdays. Since October 2007, the Philharmonie has offered Lunchtime Concerts (Lunchkonzerte) from Fall to Spring in the foyer of the Philharmonie building. Only 1500 attendees are allowed, and no reservations are accepted, so get there early to ensure entry. You can also purchase catered food to enjoy during the concert.

One of Berlin’s most popular green spaces, Tiergarten is a great escape from the busy city streets. You can join a free walking tour, or just explore the 600 acre park on your own. You’ll find wooded paths, winding streams and grassy lawns. Some of the lawns are open for nude sunbathing, look for FKK signs. There are also cafes and biergartens dotted throughout the park. Tiergarten also holds many statues and memorials, including the Victory Column, a 230-foot tower topped by a golden goddess figure.

In the middle of the Spree River, which runs through Berlin, is Museum Island, a UNESCO World Heritage Site. There are five museums on Museum Island, covering archaeology and art. Access to the island is free, and offers a unique view of the city, as well as the historic architecture of the museums themselves. To enter the museums, you will need to purchase ticket or a multi-attraction pass (they have student discounts and other types of discounts to keep it affordable). 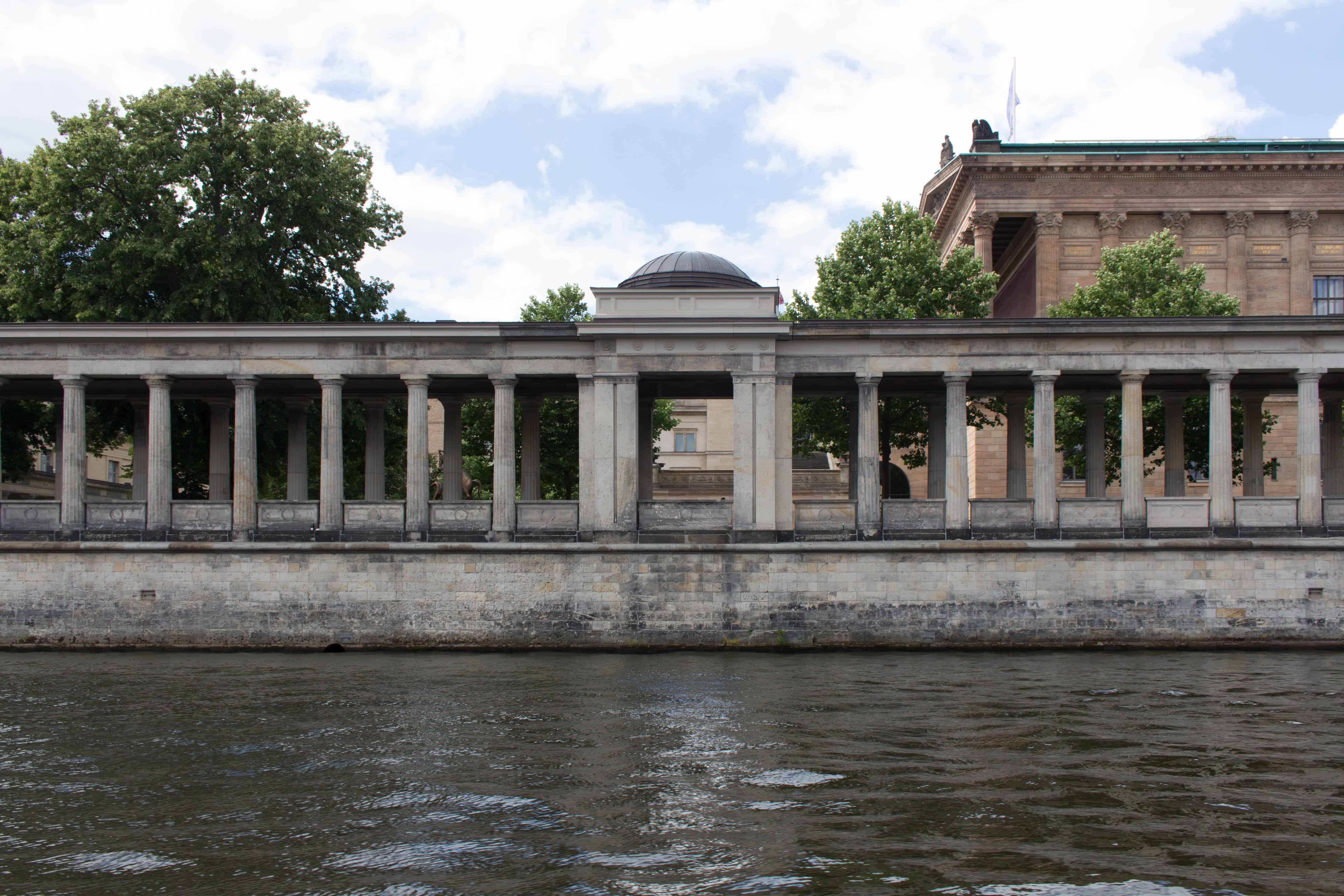 For more outdoor recreation, head to Schlachtensee, one of Berlin’s popular water destinations. Easily accessed by public transportation, Schlachtensee is loved by Berlin residents and tourists alike, in all four seasons. Summer is the busiest, with beaches and watersports, including boat rentals available. You can walk seven kilometers around the lake on a boardwalk, which is popular with runners. There is also fishing, a dog area and ice skating in the winter. This is Germany, so of course there is also a biergarten at the Fischerhütte. Since Schlachtensee is so easy to reach via the S-bahn, it can get crowded, especially the areas nearest the train station. If you’re willing to walk a bit further, the crowds disburse quickly.

Got a week in Berlin? Check out my 6 days in Berlin itinerary to help you plan your trip to Berlin!