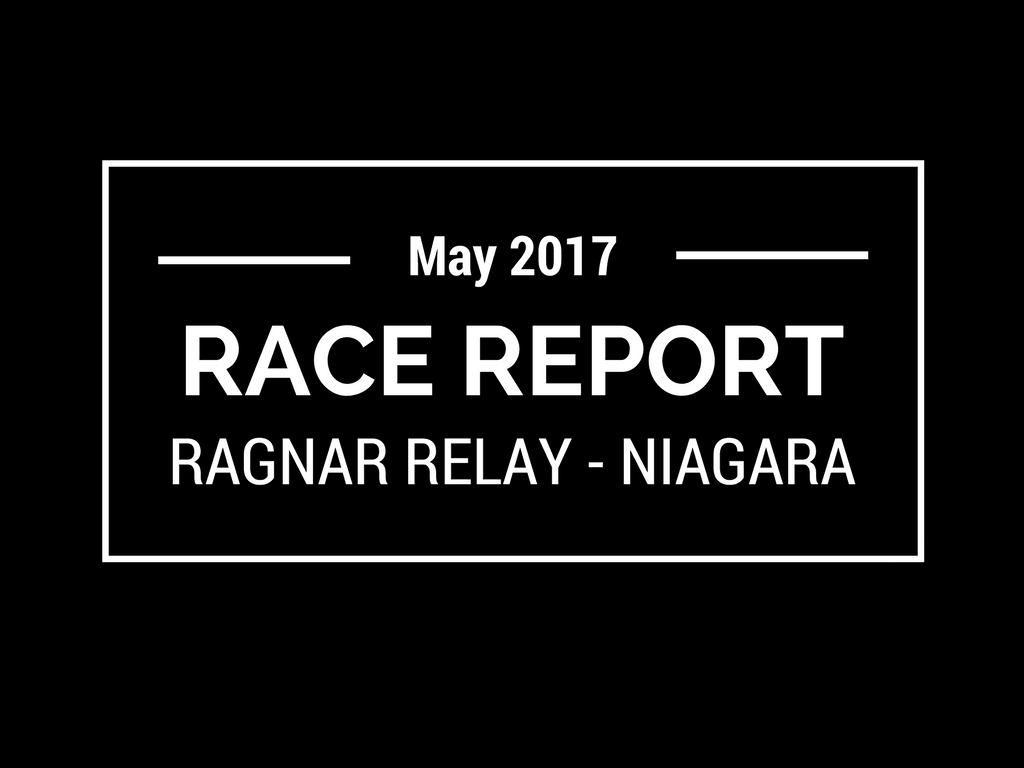 Remember when I wanted to run up to 25K to prepare myself for Ragnar Relay Niagara? Well that totally didn’t happen. After finding out my legs for the race, I definitely didn’t run as much as I had planned. You can see my weekly recaps leading up to the Ragnar Relay here. Long story short, I had some motivational issues when it came to doing my runs. I was struggling and would really only enjoy my running when my neighbour went out with me for short 5ks. I’ll touch upon this more at the end but it really took a lot of mental strength to get to the start line.

How Does Ragnar Relay Niagara Work?

There are two vans for Ragnar Relay Niagara if you are not doing it ultra style. For us, we have 7 to a van plus a driver for Van 1 and Van 2. How it works is Van 1 starts and we relay our way through exchanges until we’ve all ran once. Once we’re all done a leg, we meet up with Van 2 and hand off to them. Rinse and repeat 3 times until we end up from Cobourg to Niagara. 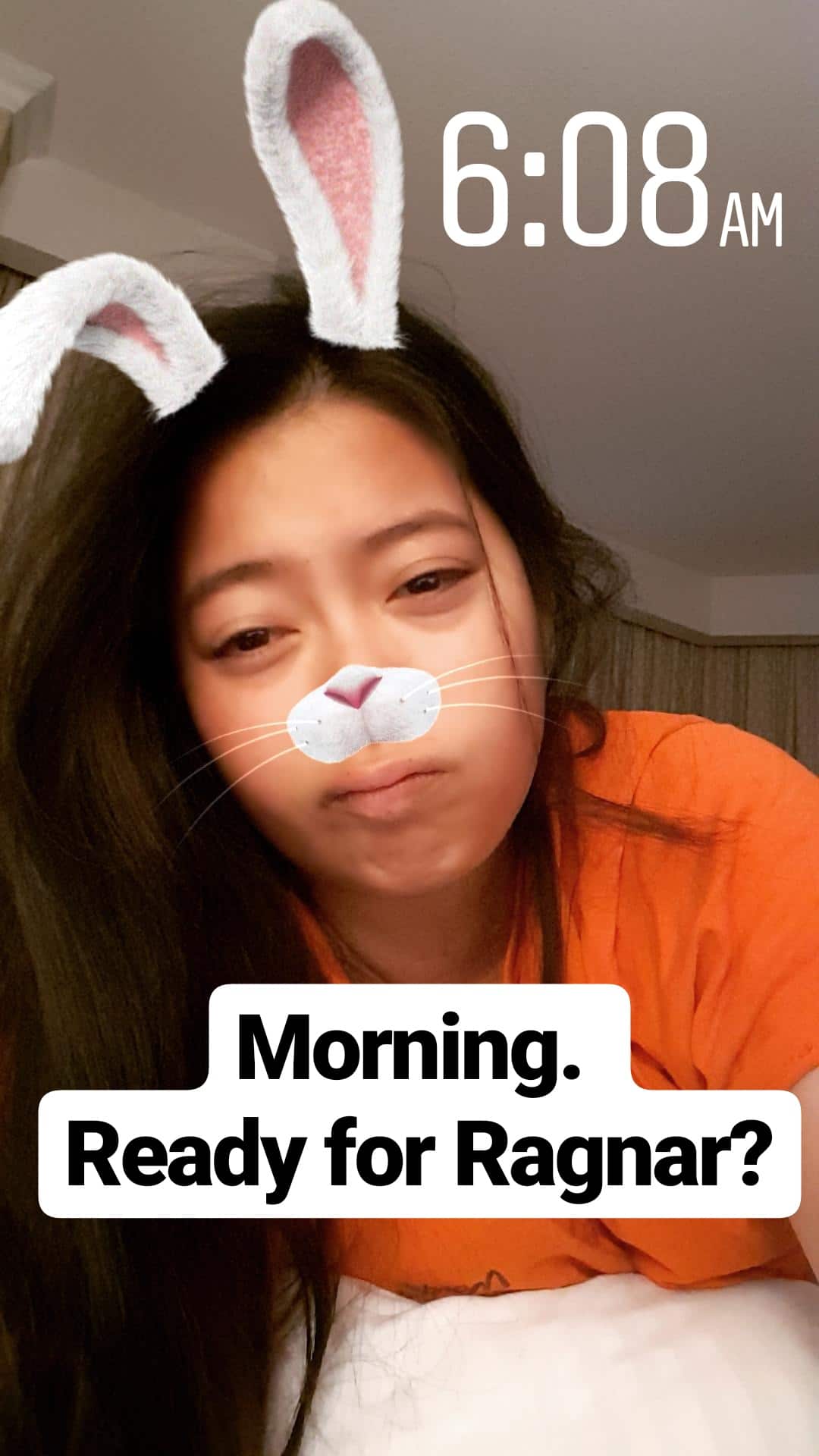 Being in Van 1, I had to wake up before the Van 2 peeps. We packed our bags from the hotel and drove out to Cobourg to pick up our bibs at 6AM while Van 2 slept :'( . 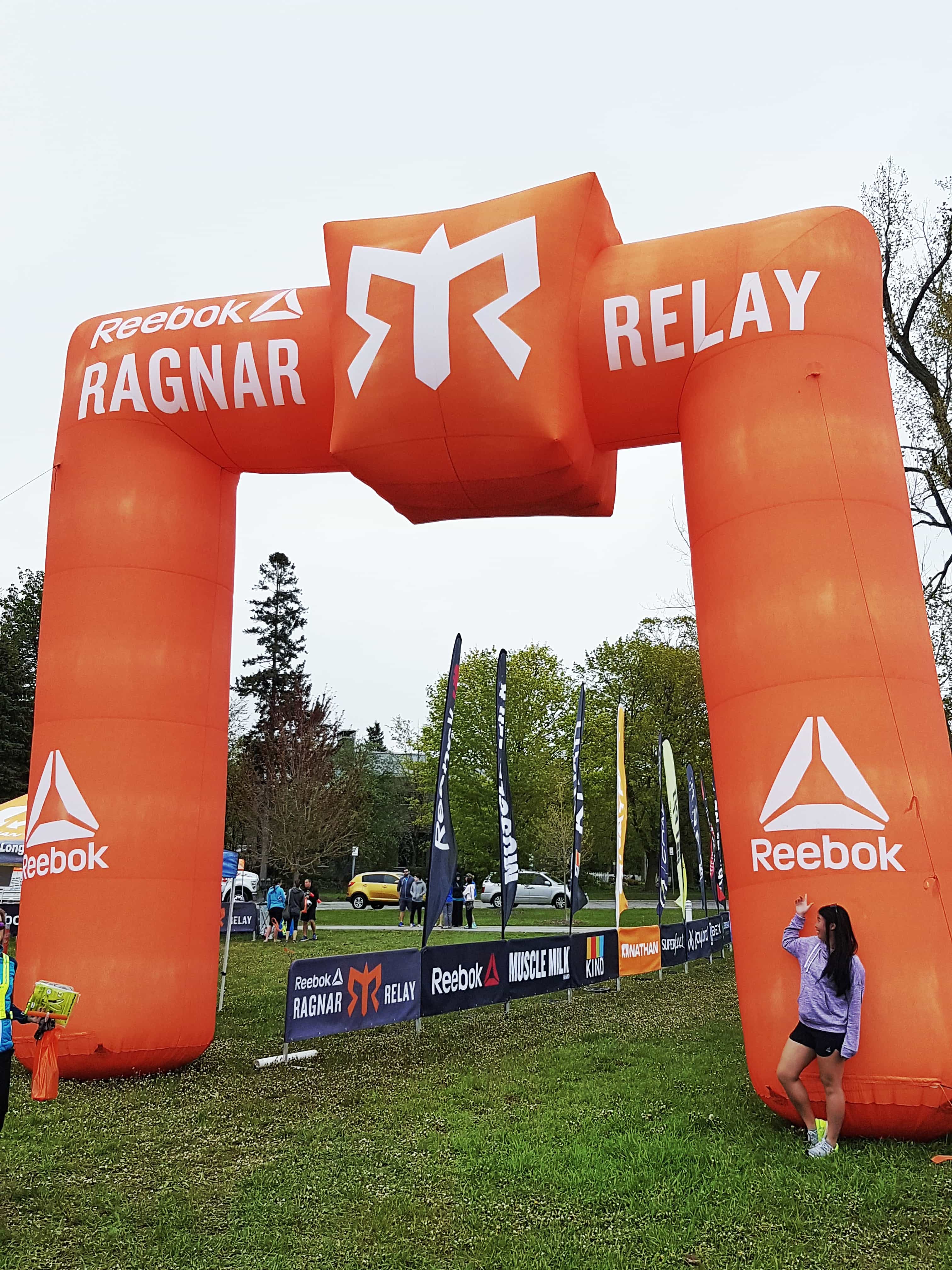 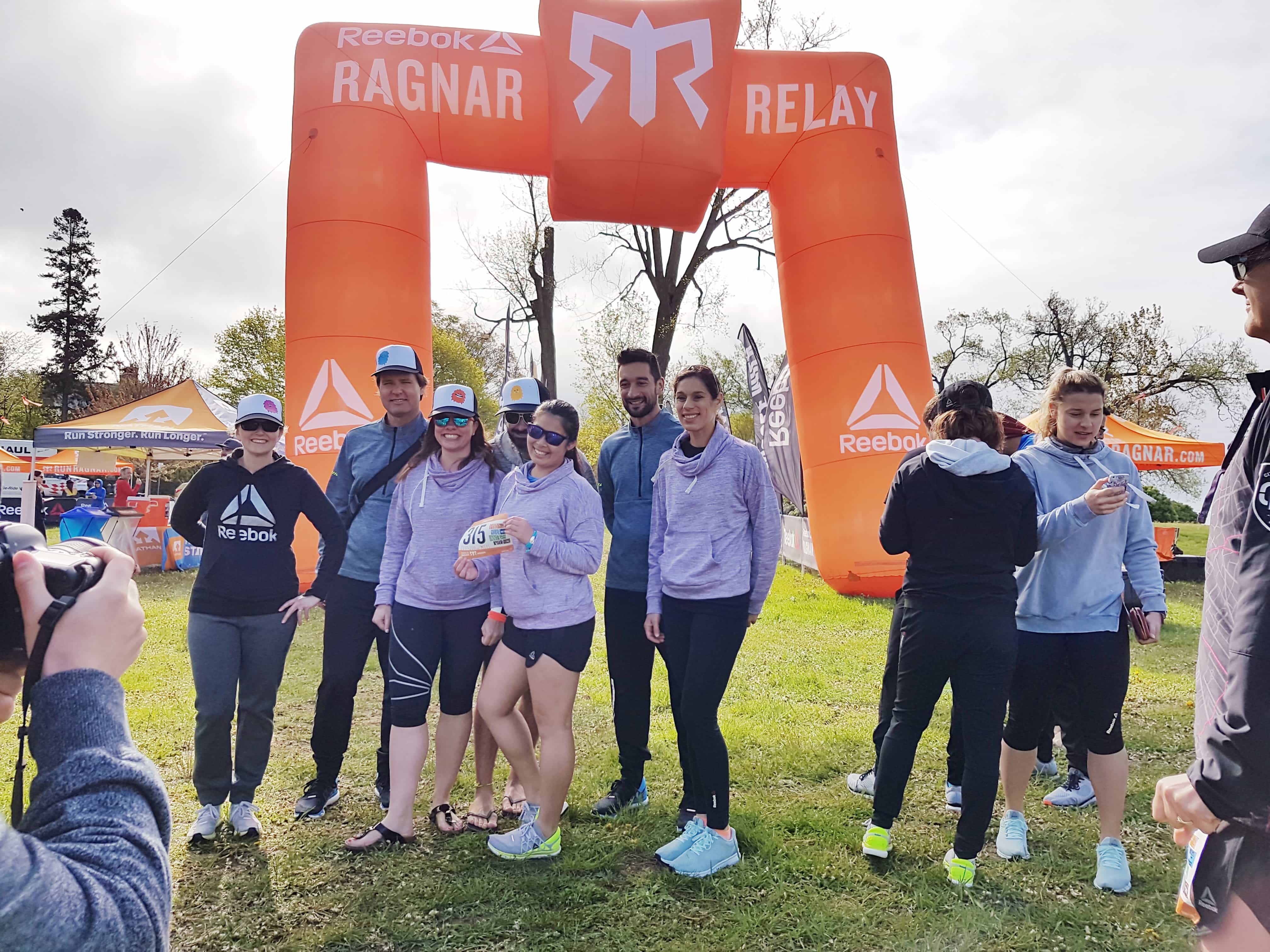 Teams were being staggered out once every 5-10 minutes so after a quick photo with Van 1 (left to right: Janice, Erik, Ange, Ben, Carmy, Eric, and Maria) it was time for me to run! 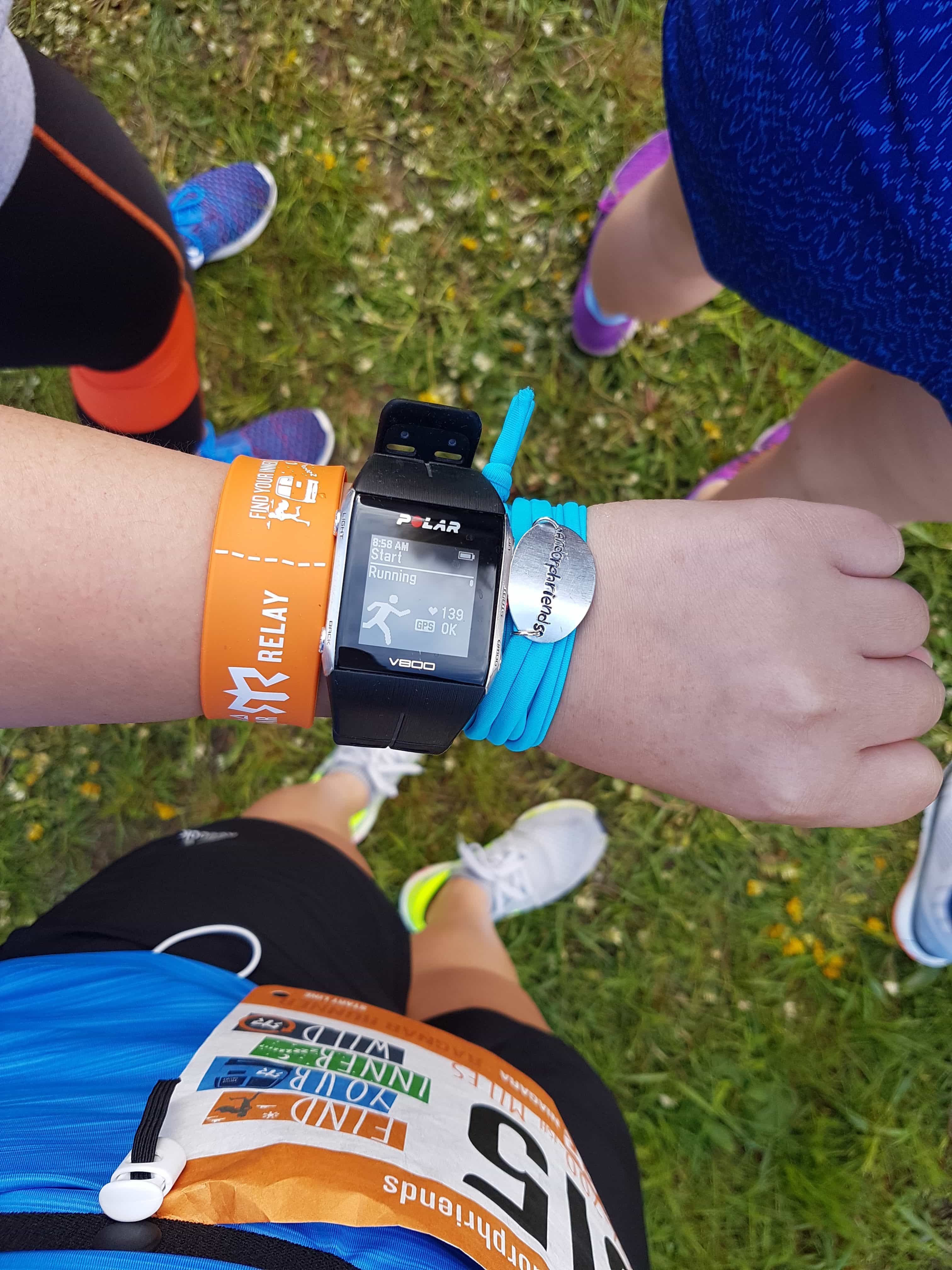 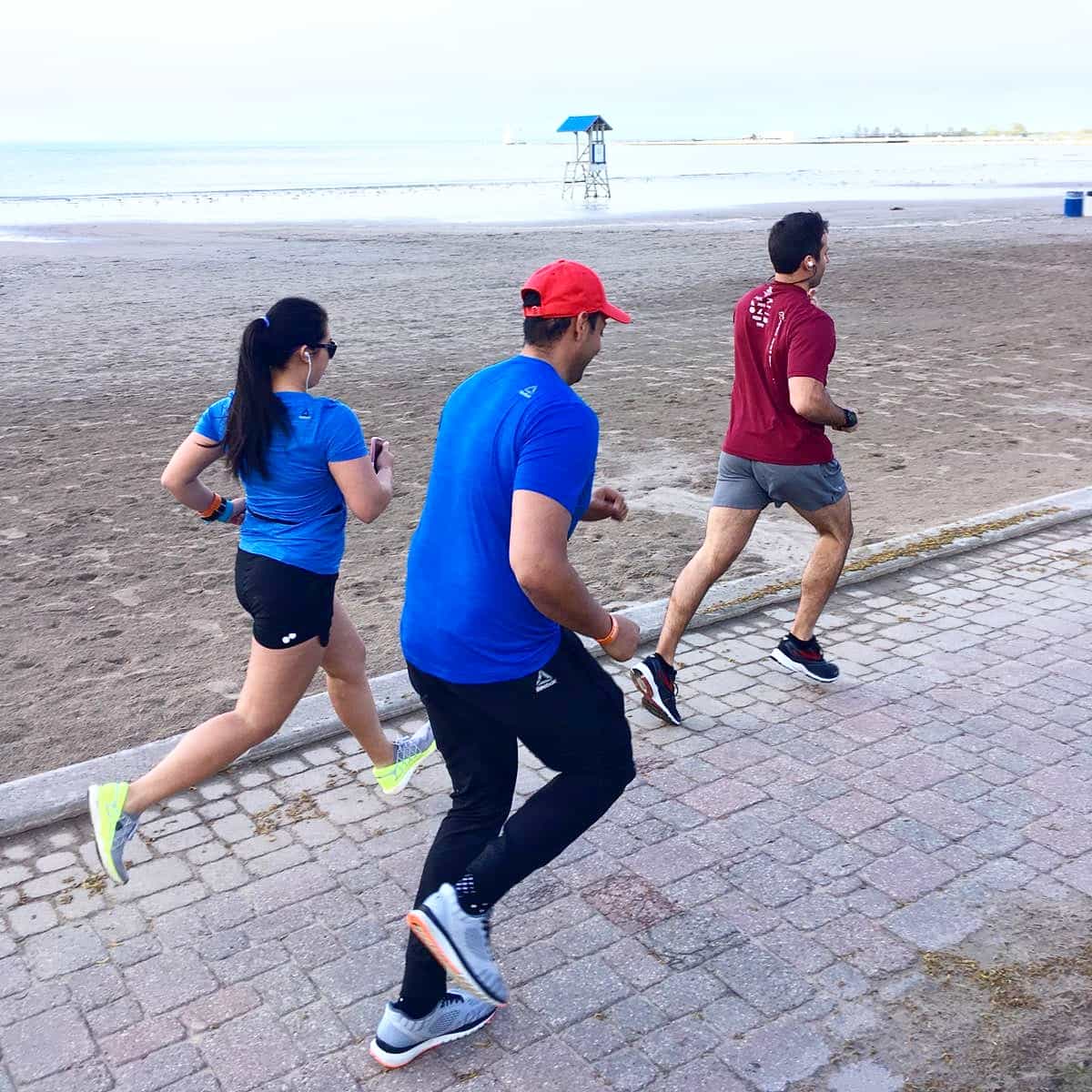 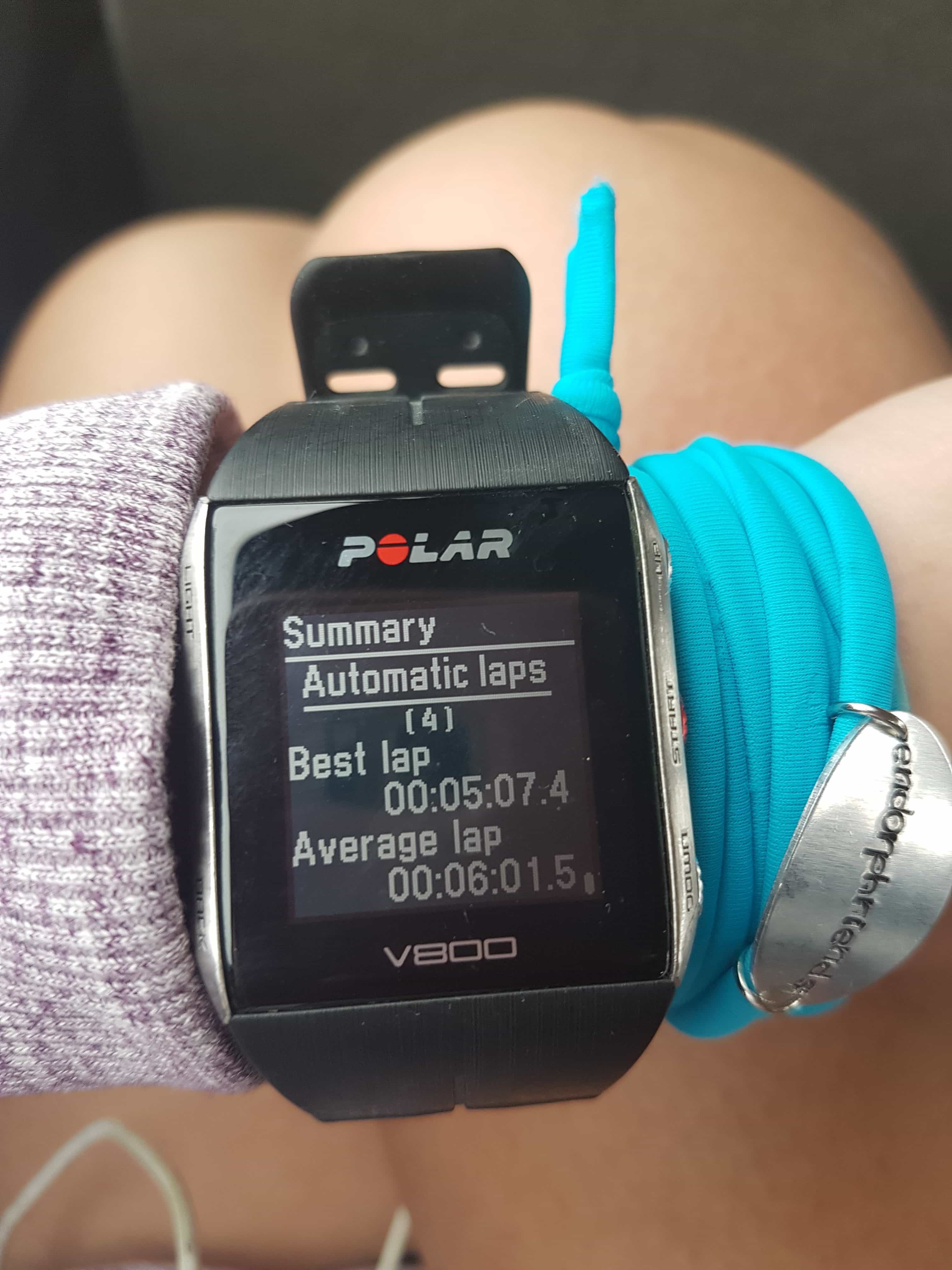 Soooo according to my Ragnar Relay app, my first leg was 4.16k and it was supposed to be flat. According to my legs and the elevation chart from my Polar V800, it was definitely not flat! Updates happen up to the last minute and even during the race itself (we had a part in my second leg that was flooded!!) so you’ve just got to roll with the punches. I was nervous being the first runner and the hills threw me off. The morning was had some strong winds and running up a hill against the wind was a bit more than I had bargained for!

Surprisingly, I managed to finish in 25 minutes. I haven’t had a run at that pace or with hills in a while and I did not expect to have finished it that quickly.

Shout out to Van Mom Janice! Janice has a background in therapy so guess who got stretched out before her run? This gal!! 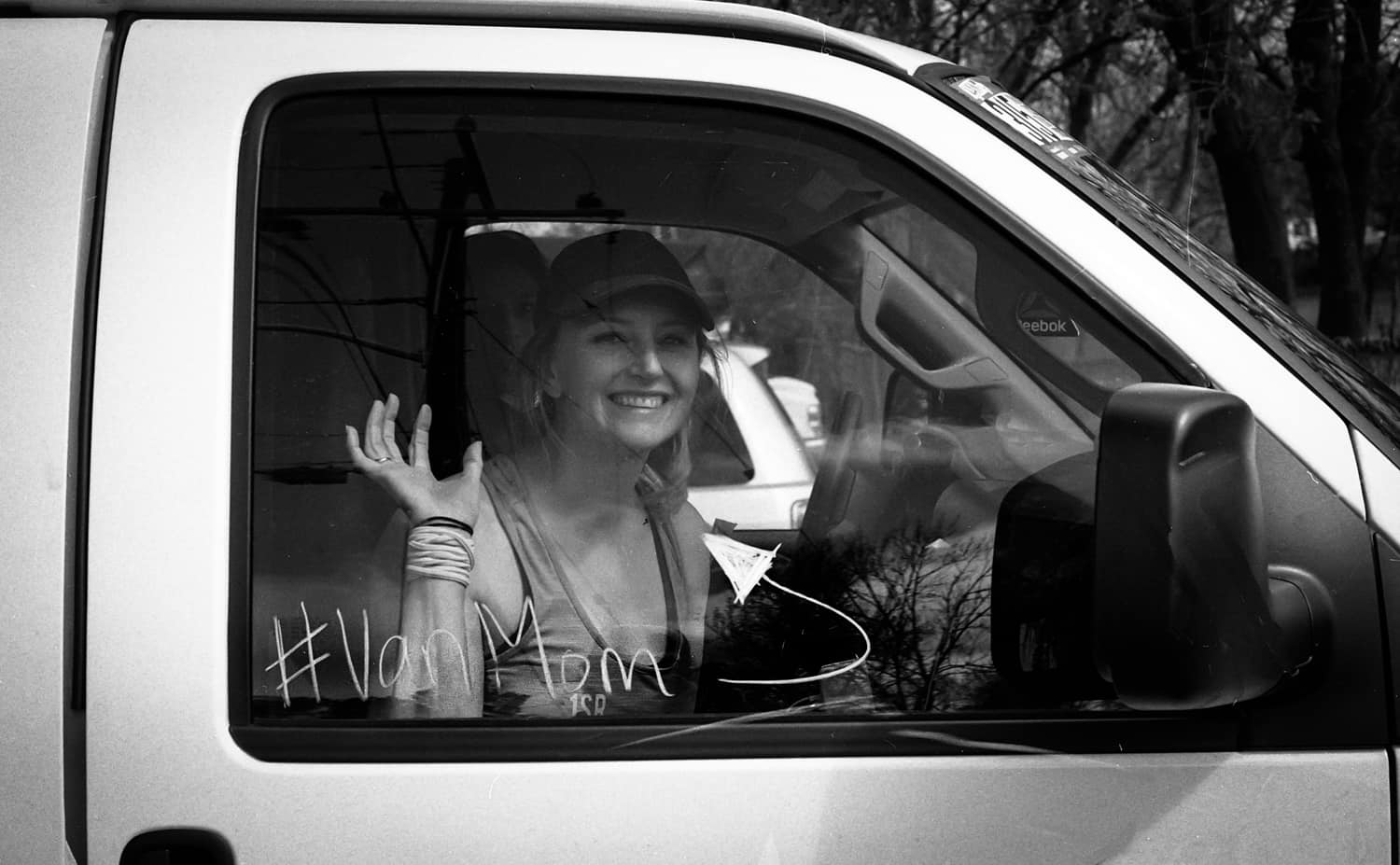 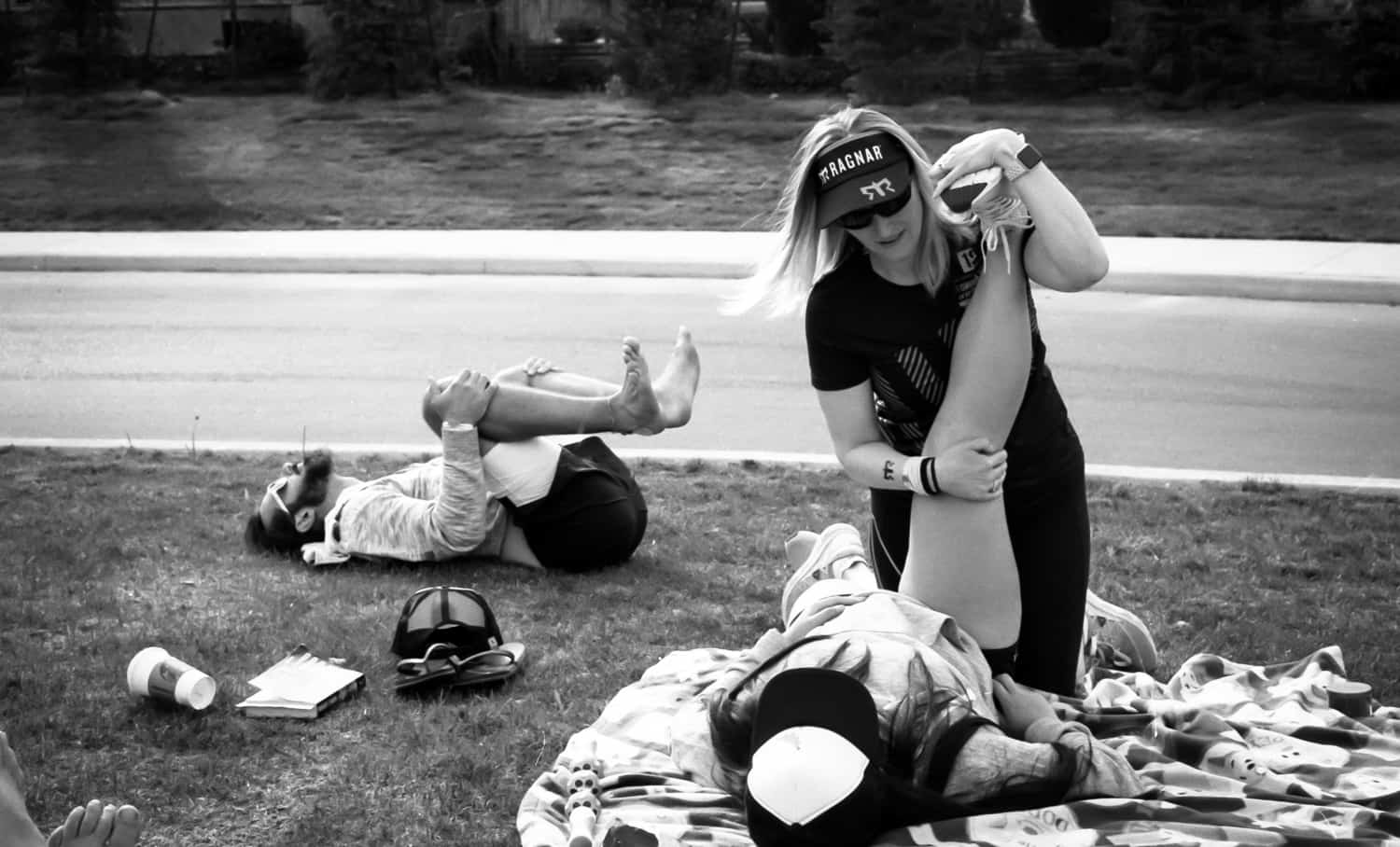 I was very lucky that my exchanges were all of the major ones aka where Van 2 hands off to Van 1. This mean I was able to quickly catch up with Van 2 (what were Allison and I chatting about in these photos? Probably about how I needed to pee) and got to have Lisa from Van 2 hand off the baton to me. 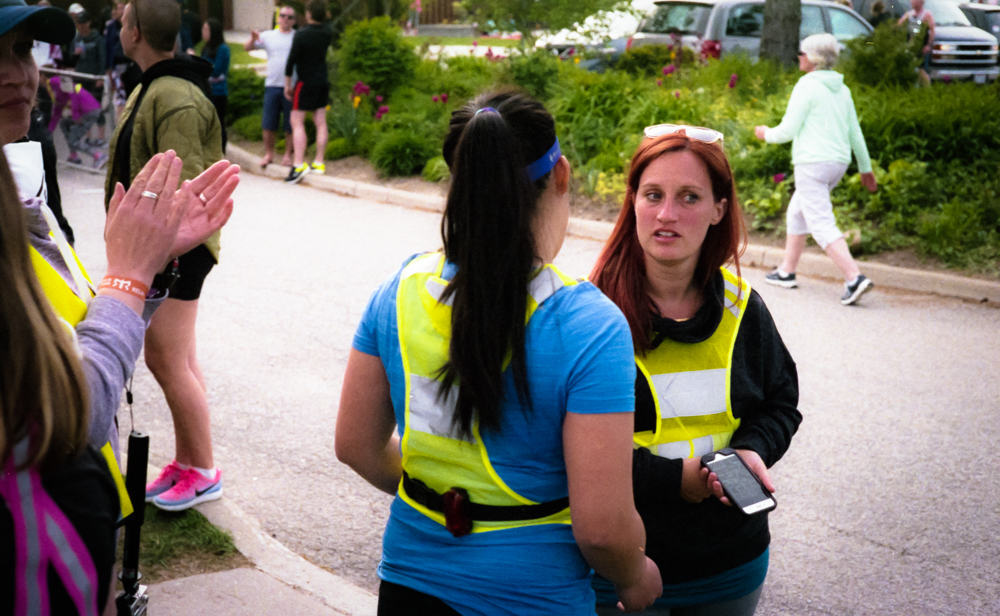 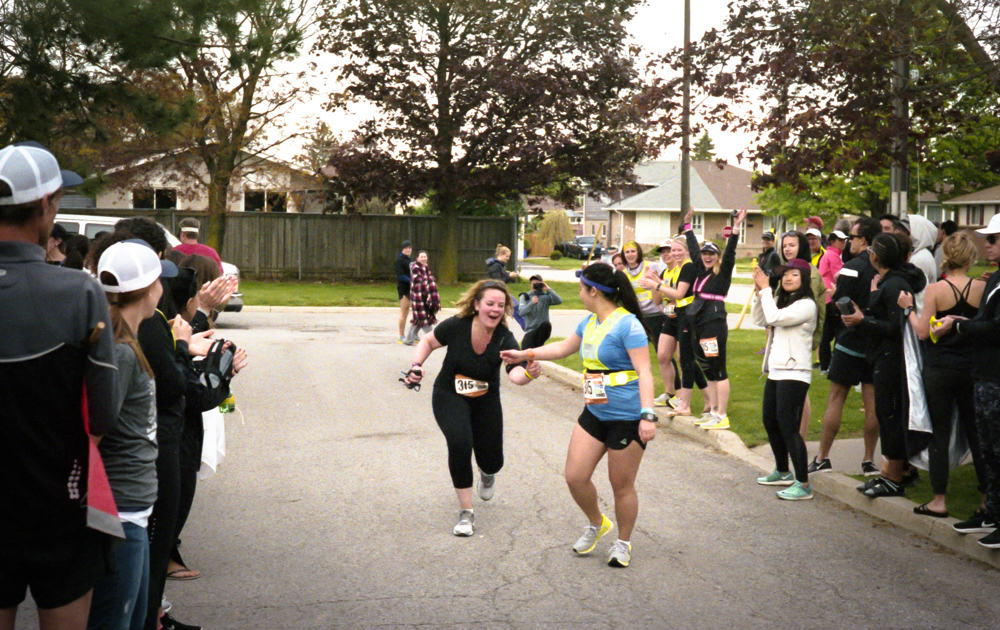 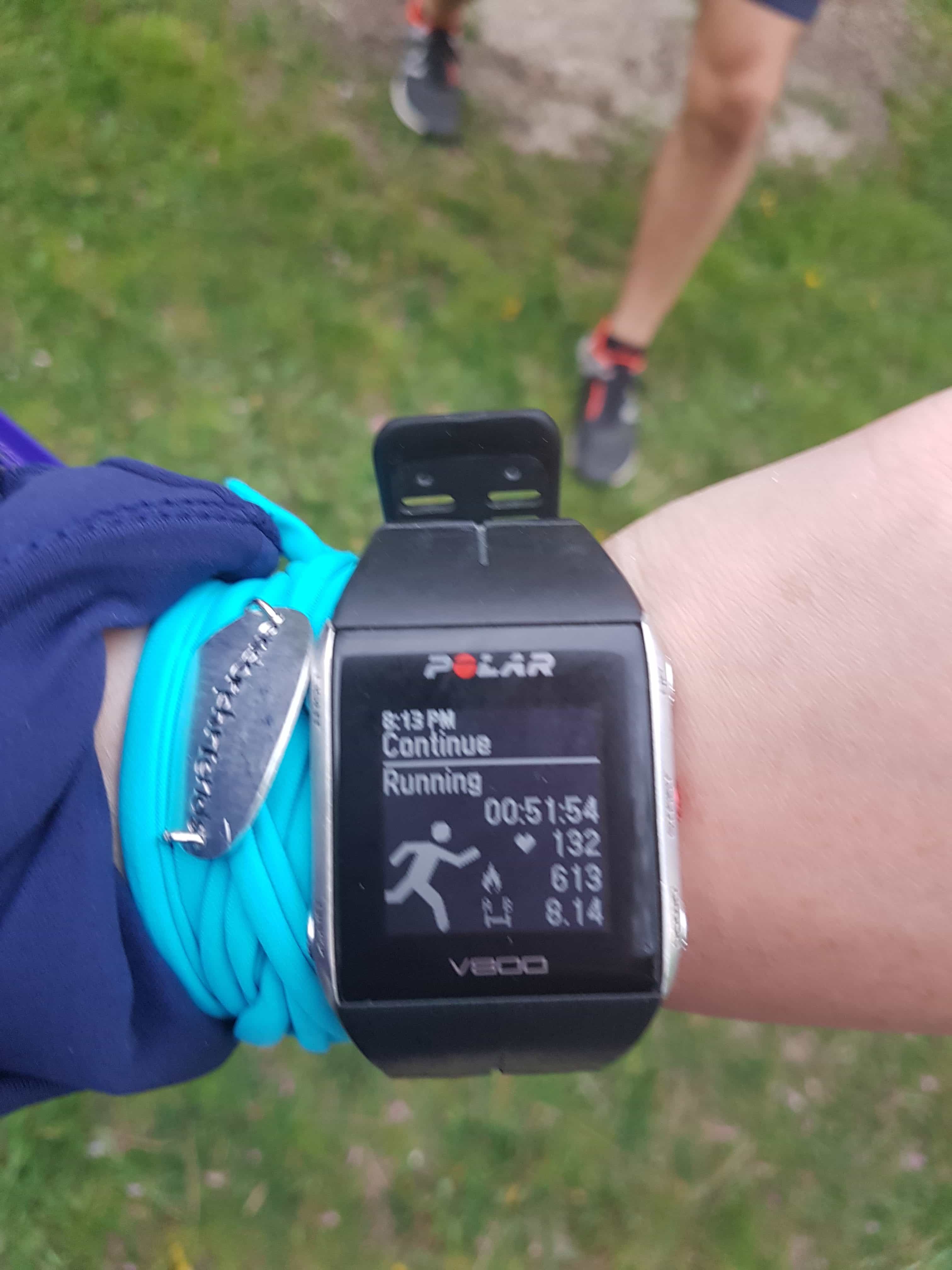 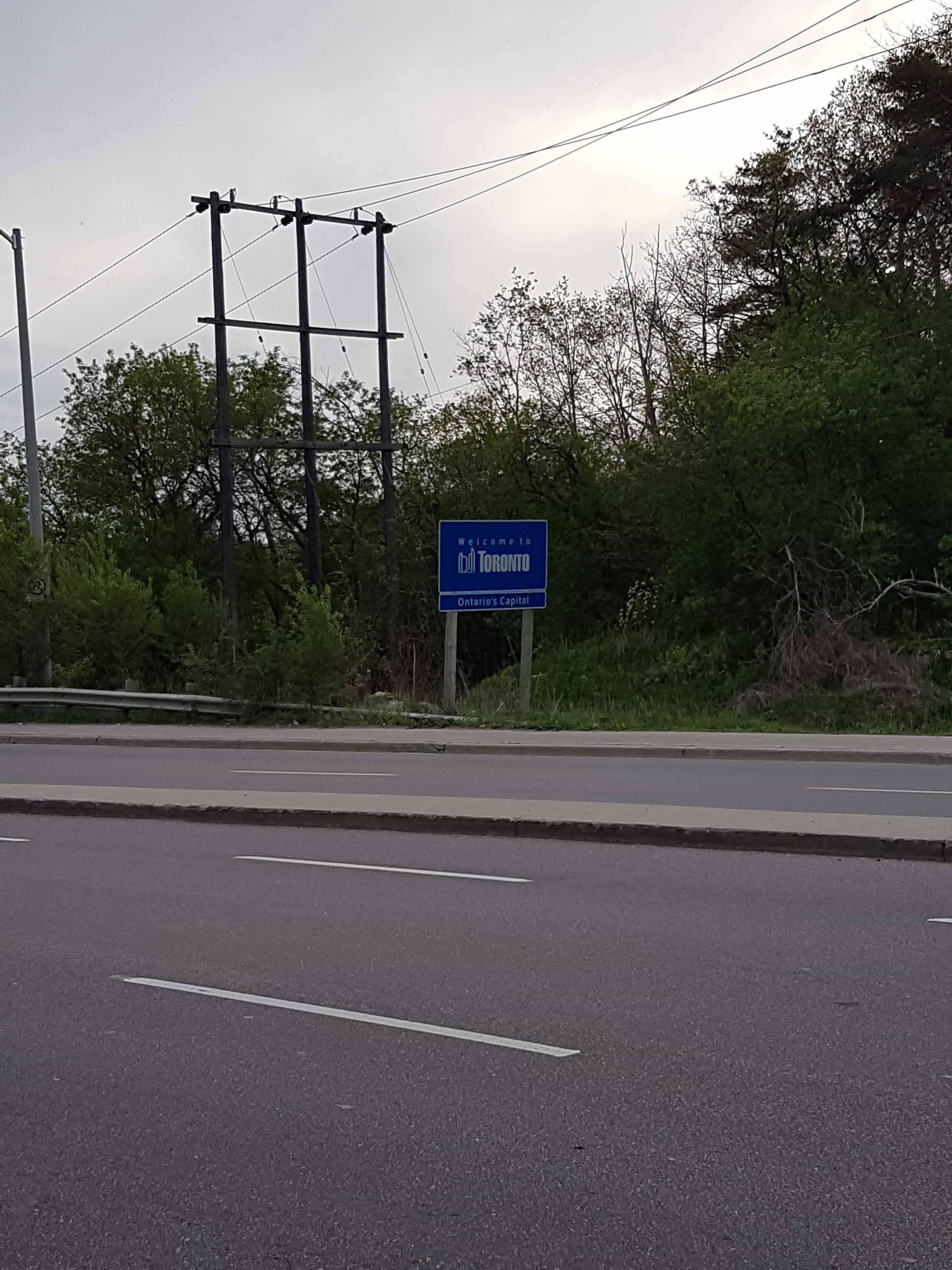 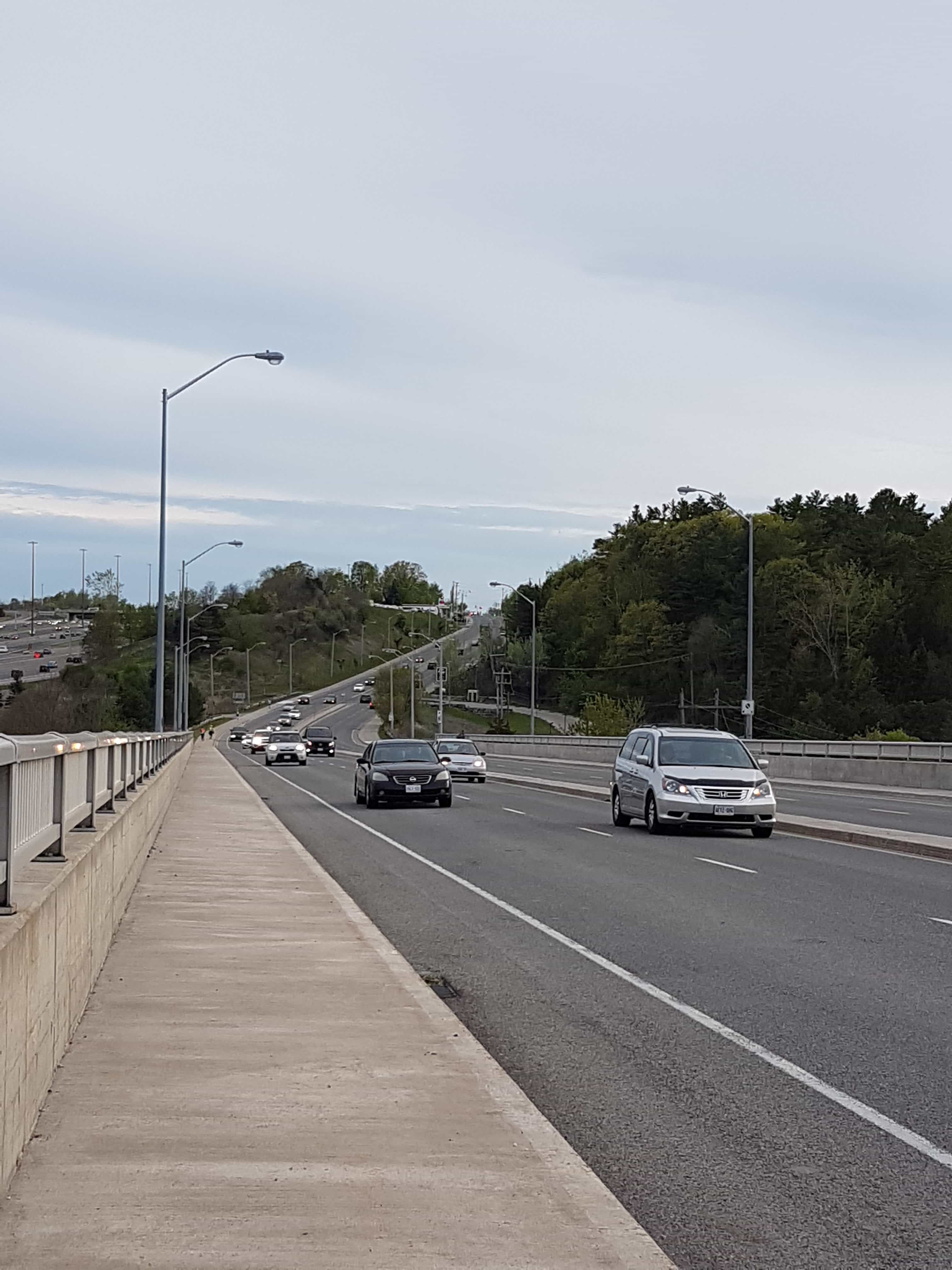 My second leg originally said 7.1k so imagine my surprise when I had already hit the 7k mark and there was not a sign in sight! My leg was changed due to flooding in the original course but due to some miscommunication, I did not find out I was getting 1k added to my leg until I hit the 7k mark. While running, I thought I was going to die but now that it’s over, I can see the humour in it.

First, while running, I realized my leg was the leg entering Toronto so I was super excited when I saw that Welcome to Toronto sign. That is until I looked forward and saw that ginormous hill ahead of me. Um hello? There was no talk of Rouge Hill in the course directions!!!! After texting that to Allison, I got a OMG YOU ARE ON THE WRONG PATH text because neither of us knew about the course change! As I ran in a panic, I was passing other girls along the way – the hills were rough, as I passed, I tried to encourage the girls to start running again and pace with me but they weren’t feeling it. I’m surprised I even got through the hills myself!

Anyways, I saw that they had the Ragnar Relay bibs on so I pretty much texted back WE CAN’T ALL BE LOST CAN WE?!  My van 1 whatsapp group wasn’t responding and van 2 was trying to figure out what was going on and I just kept running up more hills and trying not to be blown off into the highway from the bridges that FINALLY I saw the 1k to go sign indicating I was at the first place. That’s when I saw Ben, one of van 1’s runners coming out to run me in. For a while there, I was starting to think I was on a wild goose chase and maybe those others girls were following me and I was leading them to their deaths with me! But all’s well that ends well! Ben ran me in, I picked up the pace, and we sprinted towards the exchange chute and tagged the next runner in. Once I was in the van, Van Mom Janice got me an apple and I happily ate the entire thing along with some medjool dates before we drove off to our next exchange. 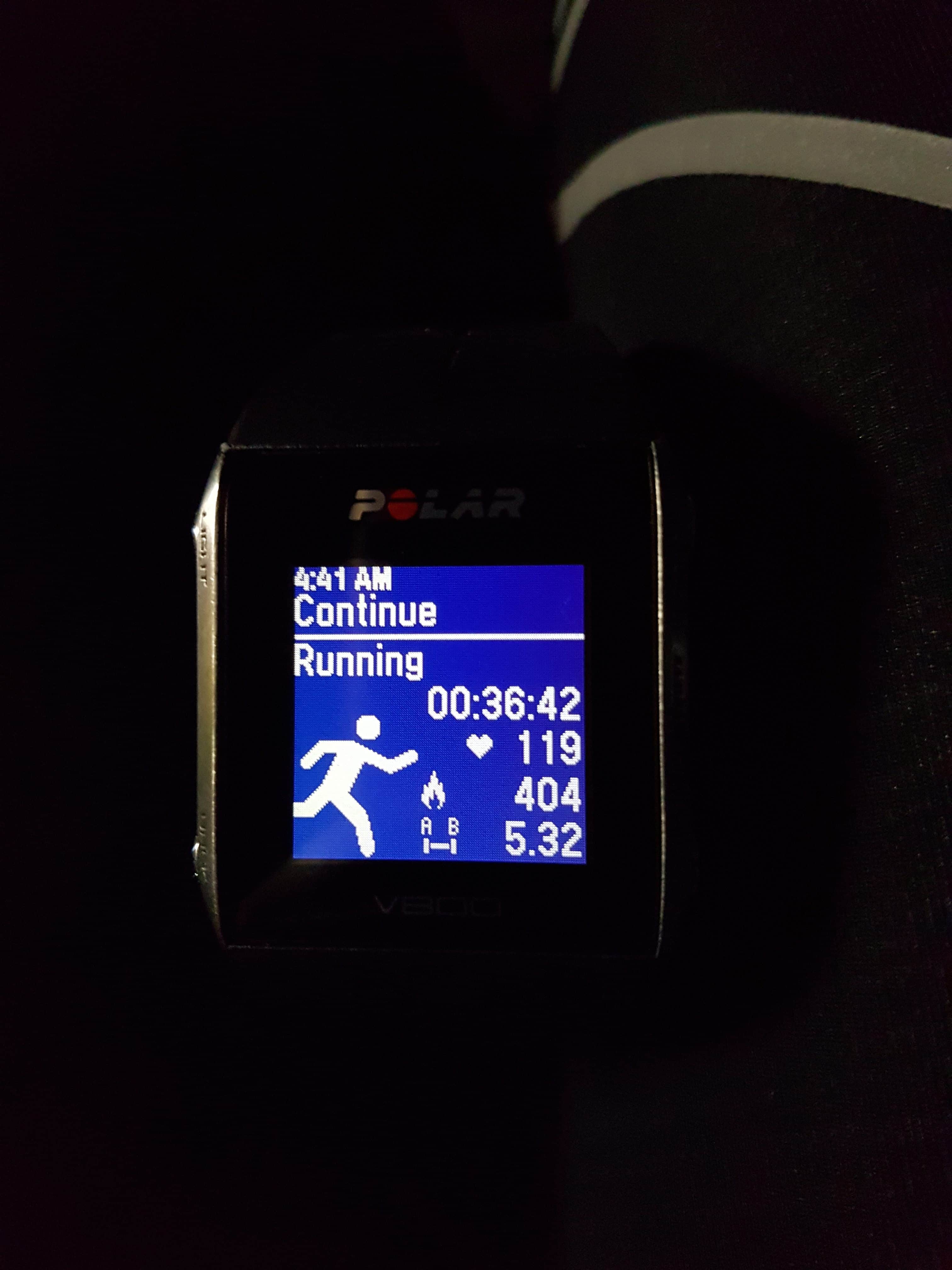 NO. SLEEP. That was how this run went. I couldn’t fall asleep in the van that evening while Van 2 ran so I sat in the community centre for 3 hours. THEN OUT OF THE BLUE H SHOWED UP. 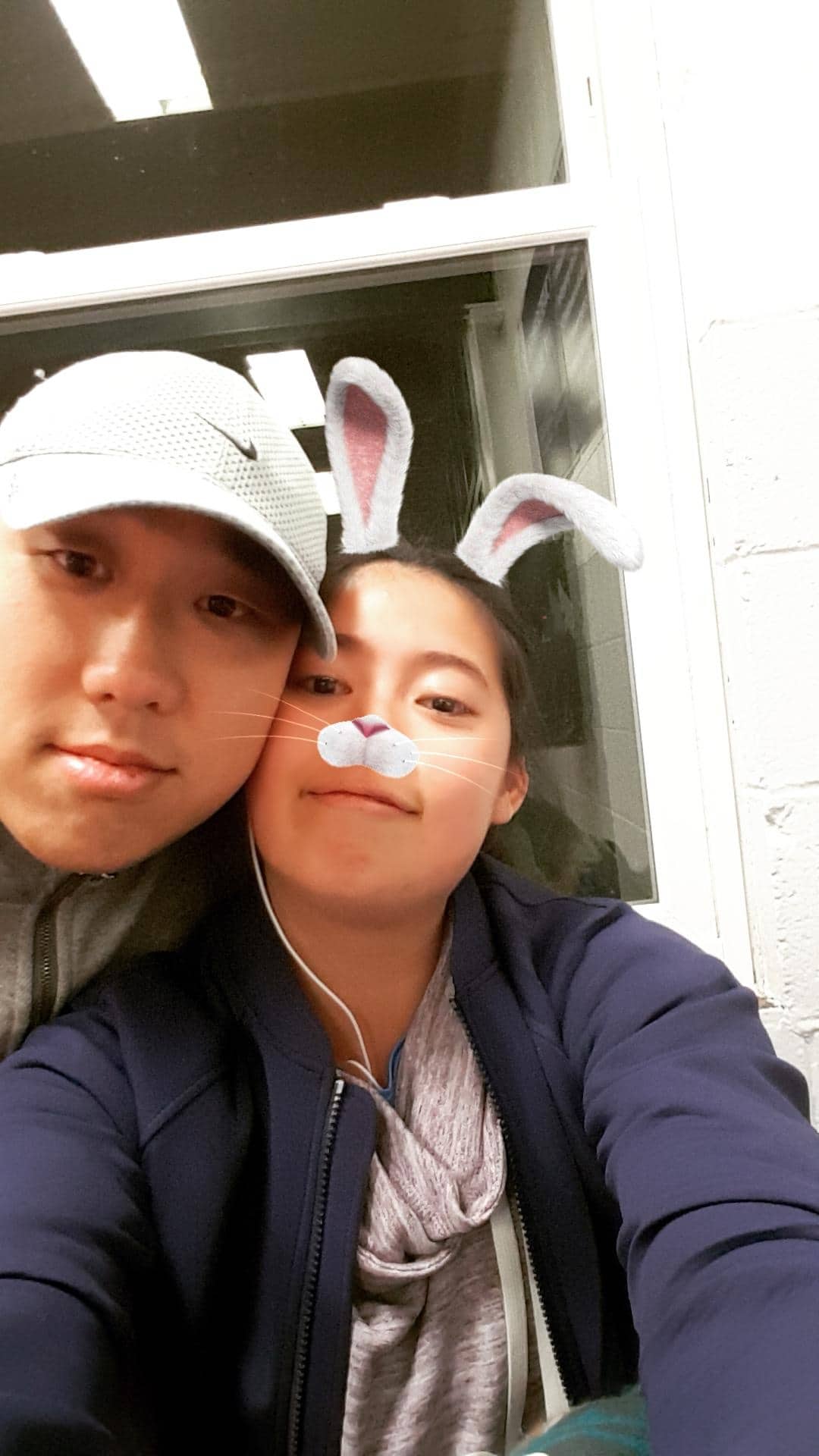 He literally drove for hours in the middle of the night to see me off for my last night leg. I was so tired that I couldn’t even express how happy I was so I just started crying instead. It was quite a good look on me, wrapped in layers, sleep deprived, and exhausted then add crying happily into the mix.

After some hugs and kisses, I was off for my night leg. Eric was quite the nice teammate and paced me the whole way through my leg and boy was I glad he agreed to pace me! (Originally Ben was set to pace me BUT VAN 2 STOLE HIM FOR THE EVENING LOL. Ben was such a champion – running his leg then running with most of the ladies directly afterwards. Can I have his legs? Actually, can I have his form in general? Seriously, just looking at this photo: 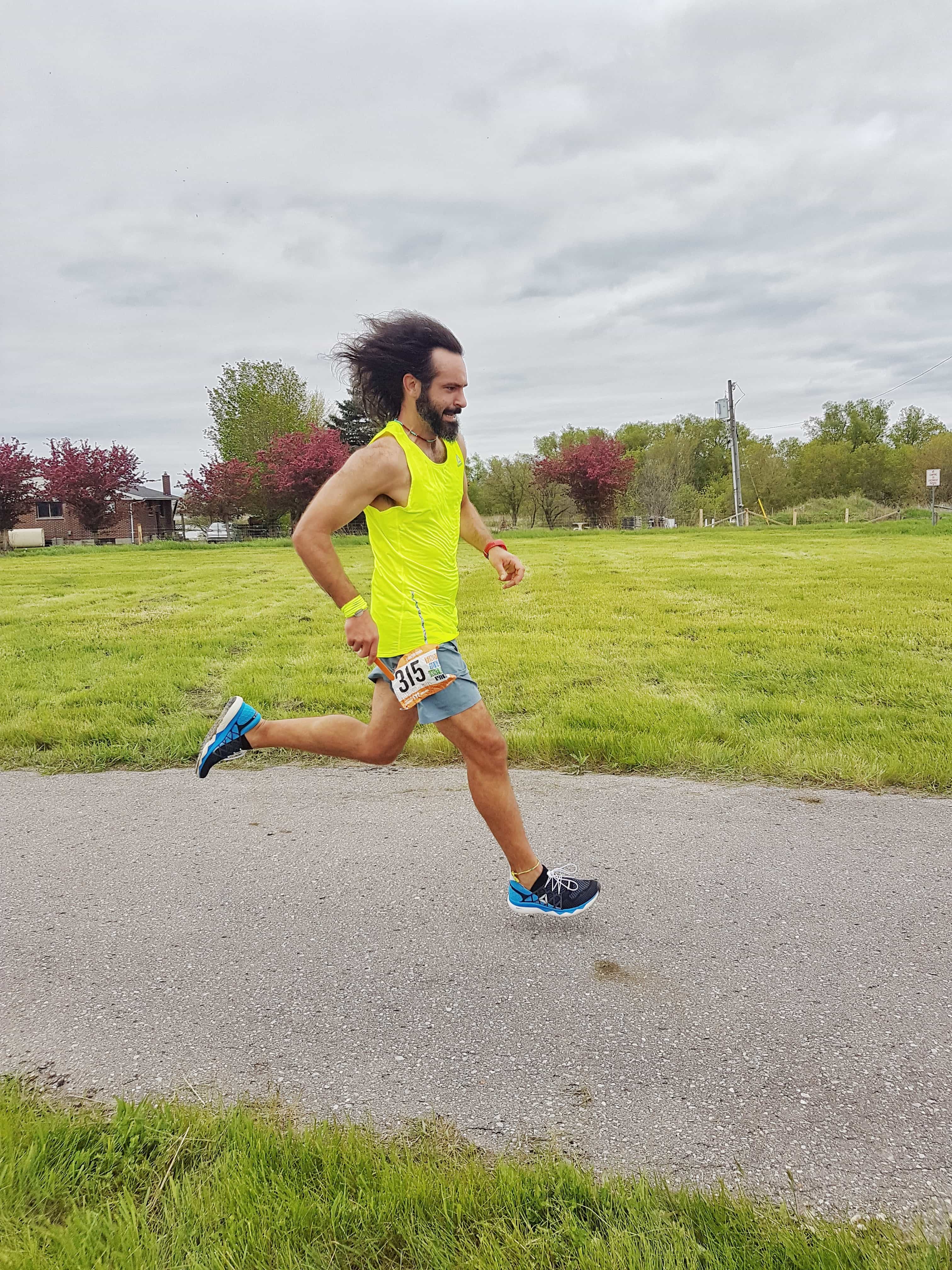 life is so unfair…) Anyways, Eric was very kind to pace me and the route ended up being similar bike path – isolated between rows of streets with no street lights. We had passed a girl and offered to run with her since she was alone but she turned us down. It was definitely quite creepy in my books since it’s not a path I was familiar with and the only light source was from our headlamps. To make things less creepy, we chatted along the way (“Soooooooo what do you do?” me to Eric after 200m haha) and kept the pace easy and consistent.

H had driven by at one point on his way home (or so I thought) and cheered out the window which made me tear up again. He seriously wins boyfriend of the year award. It really sealed the deal when I got to the exchange point and THERE HE WAS AGAIN. It was like past 4AM and there he was! Boyfriend. Of. The. Year.

And just like that, I was done my 3 legs! I promptly spent the next few exchanges laying in the back of the van resting. Sorry I didn’t come see you off team – I physically could not move!

Right before the finish line at the 200m mark, the last runner gets a special medal (for running the hardest and longest leg!) and then their teammates can join them to run to the finish line as a group. After filling up on fraps from Starbucks and popcorn, Van 1 went over to the 200m mark and sat there waiting. Once we got the 1k warning text from Lisa, we were ready. The second we spotted Lisa coming in, we got ready to run her in! 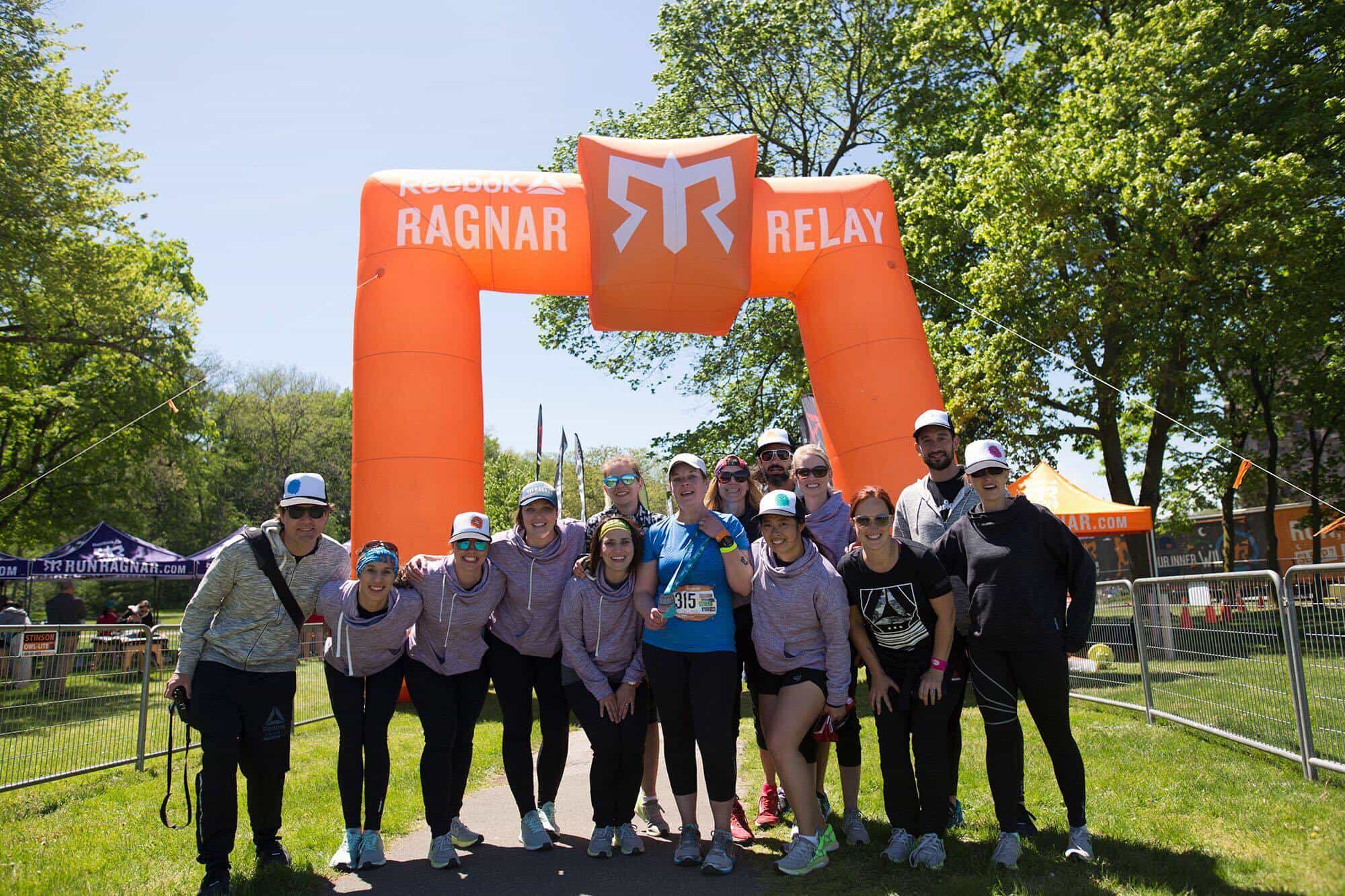 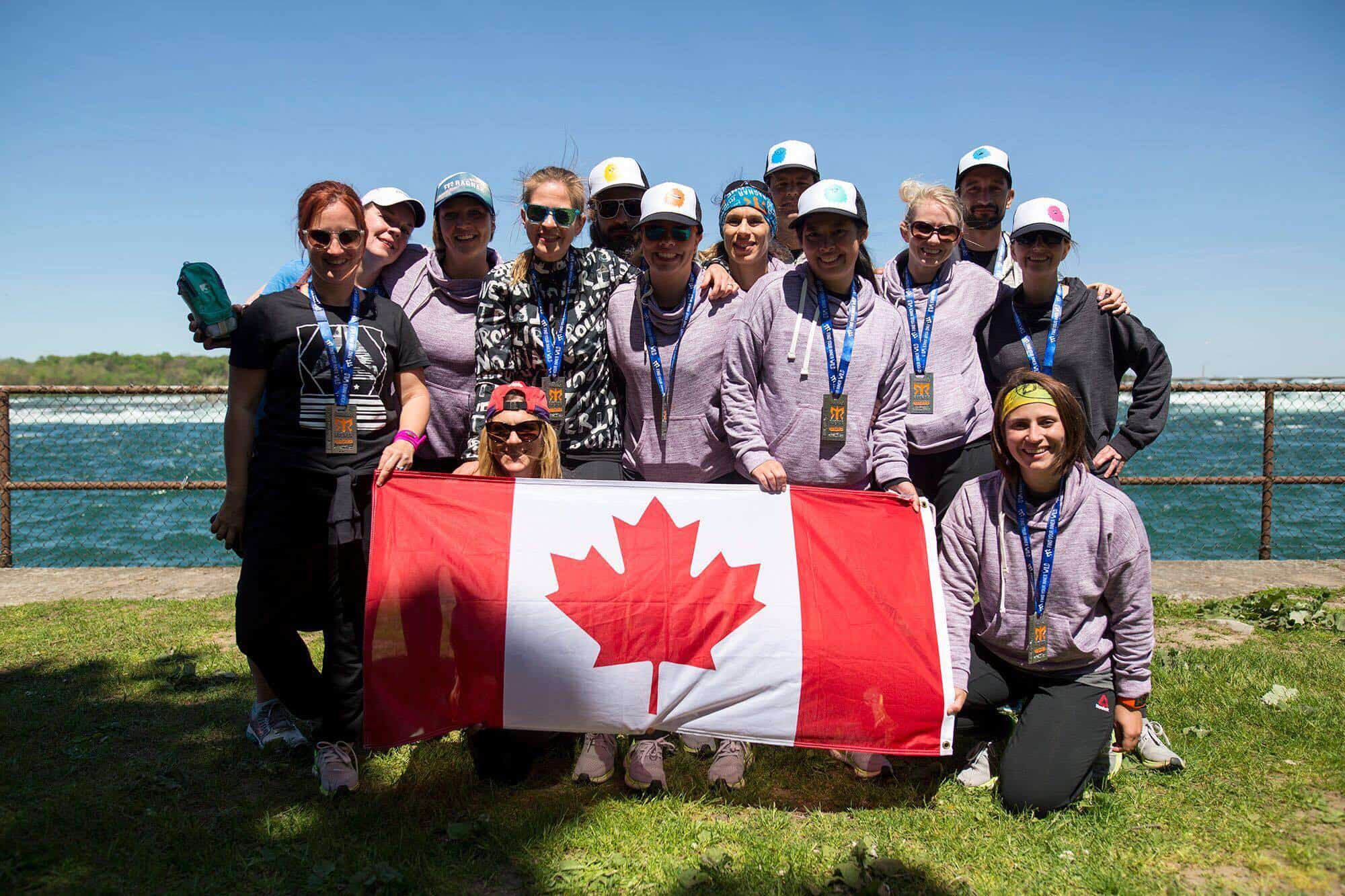 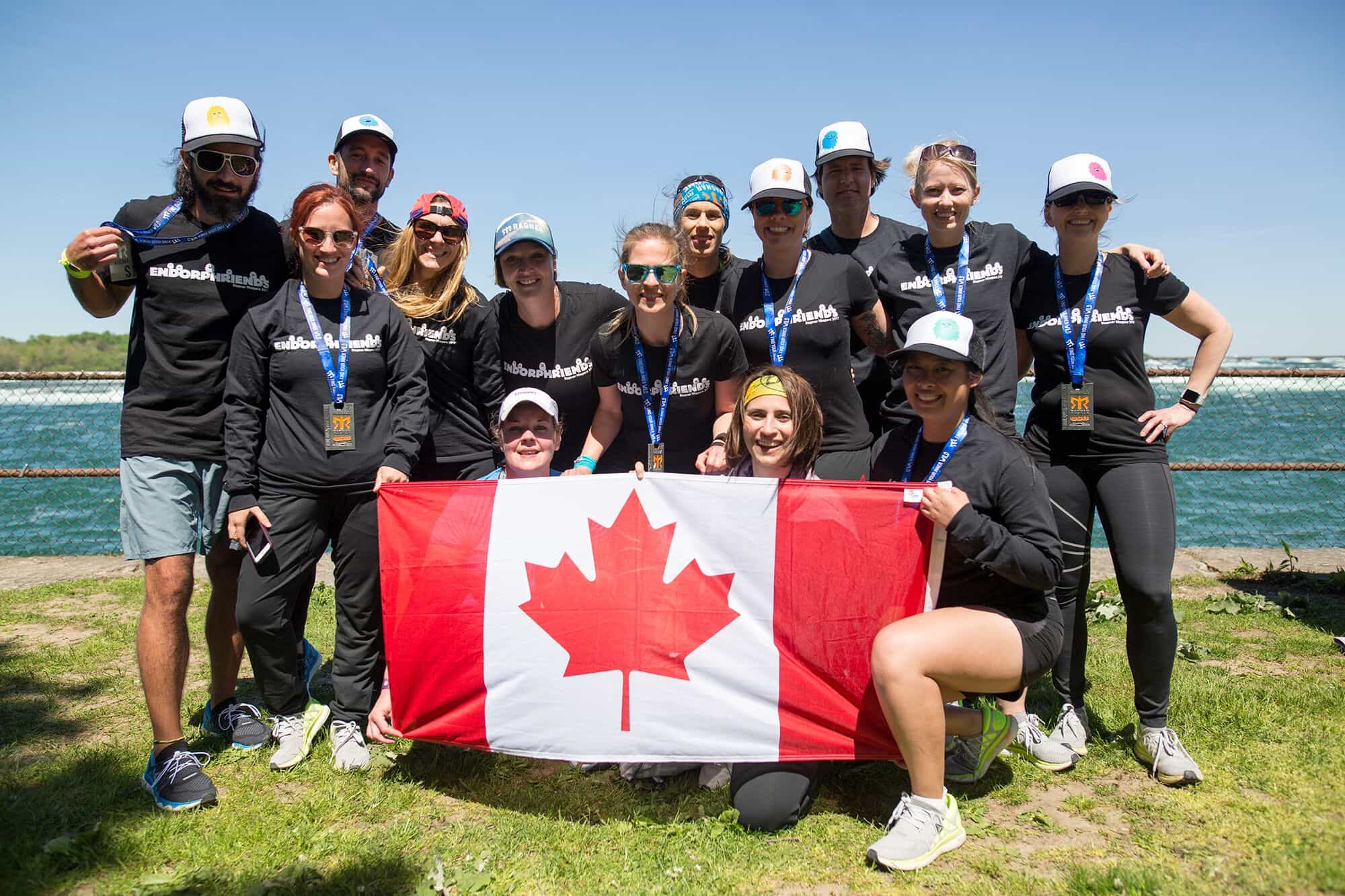 Together we ran 200 miles. Together we can accomplish anything. Shout out to @reebokcanada and @runningroom for the sponsorship. Our wonderful van drivers @Mia_pinkjacket and @leannechiz for driving our butts around in a giant van. @Gawck for decking our van decals out. @shermanruns for being our midnight volunteer at Leg 25. @allisonvandekemp for putting this together. And of course all the wonderful teammates (#endorphriends) who made this possible. Eric for pacing me. And @healthyhenry for driving a zillion miles to come cheer me on on my last leg. Tears were shed, 0 sleep was had, and friendships grew stronger. I’d totally go for another ? (extra shout out to van mom @salads4lunch for mom-ing us, @runningdesigner for the logo, and @luvthiswonderfullife for running the hardest leg!)

There was a lot of crying and emotions after the race. We cried crossing the finish line, we cried afterwards in our hotel rooms, and then we cried at home. Here’s what I shared with my teammates after the race and I feel like it pretty much sums up how I felt about the race.

?) really lit that competitive fire back under my ass with the kill counts. I love you all and am very grateful that you guys pulled me back into a sport that I fell out of love with. Y’all the best.

Had enough of the sappy feels? Let’s get technical. The race itself was very well marked for the most part. Some of the roads were paved, some where not. Most of mine were but there were a few parts where I ran on grass or gravel. There was a little hiccup here and there but considering the markers had covered 200ish miles, that was pretty good! The exchanges were very straight forward, there were plenty of parking available at exchanges, the volunteers were great, and the course was pretty scenic. However, one thing I did not like was that at their Ragnar branded merchandise tent, they only took USD, or Credit/Debit in USD pricing. As a Canadian running a race in Canada, I was not expecting that. Not only was the merchandise more expensive than I thought with the exchange rate, I would technically be dinged with a service fee on my Visa for using it on USD.

Let’s Chat: Have you done a relay before?

Can’t get enough of my recap of Ragnar Relay Niagara? Well samesies! I did it again haha! Check it out here: RACE REPORT: Ragnar Trail Cottage Country Sept 8-9

Disclaimer: Thanks to Ragnar Relay for sponsoring our team entry! Also, thanks to Reebok Canada for sponsoring our race experience. All outfits shown above can be found at Reebok.ca including the Floatrides that were worn throughout the entire race. 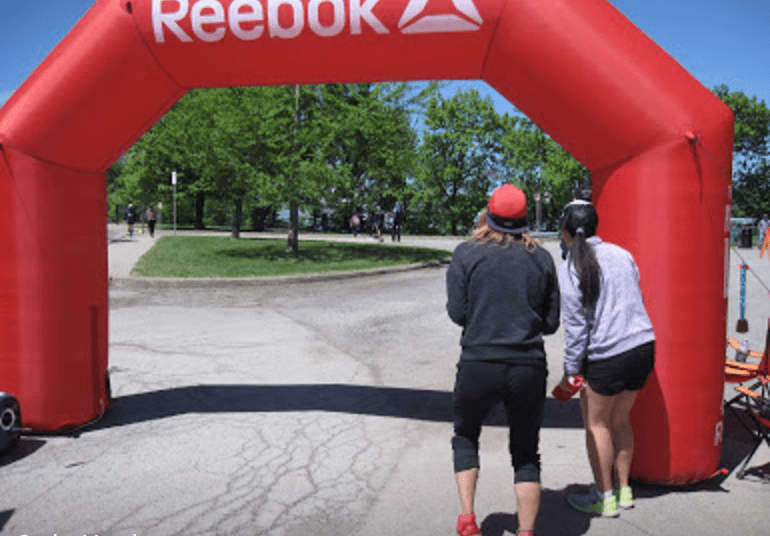 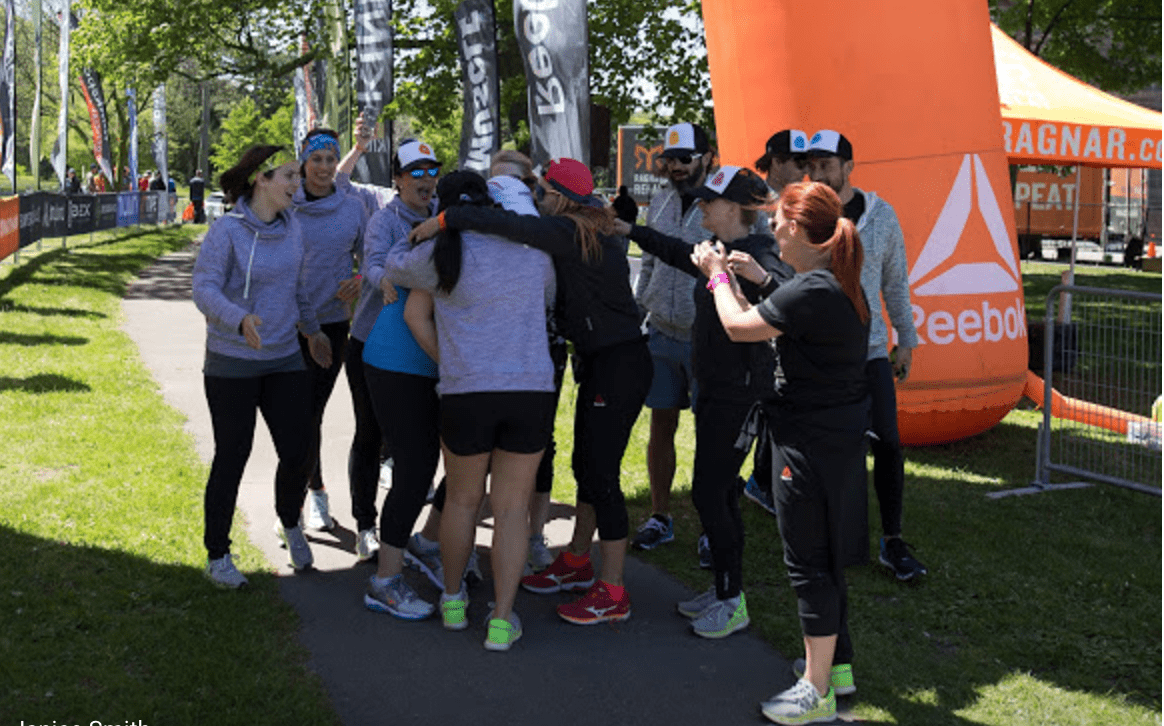 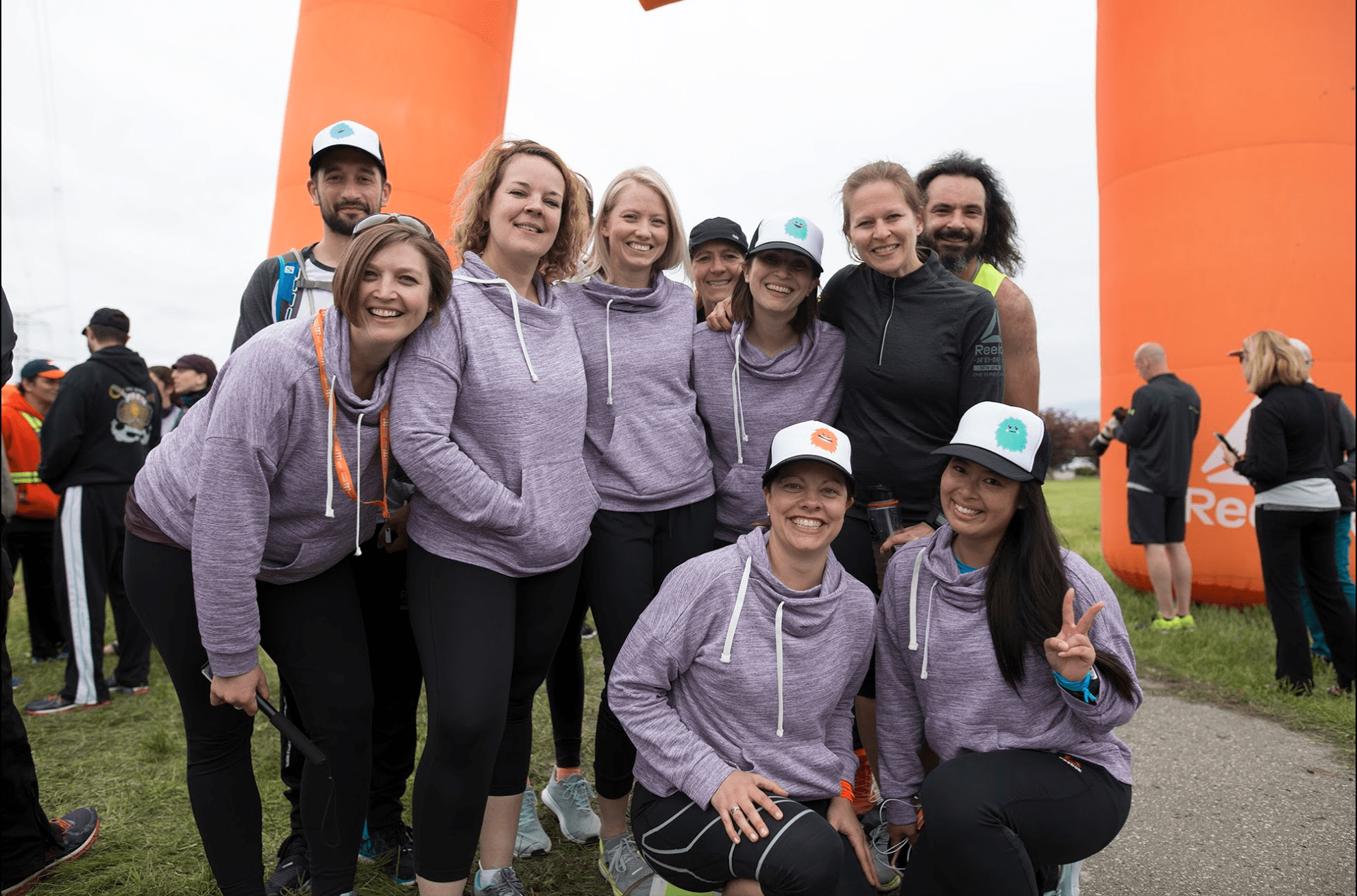 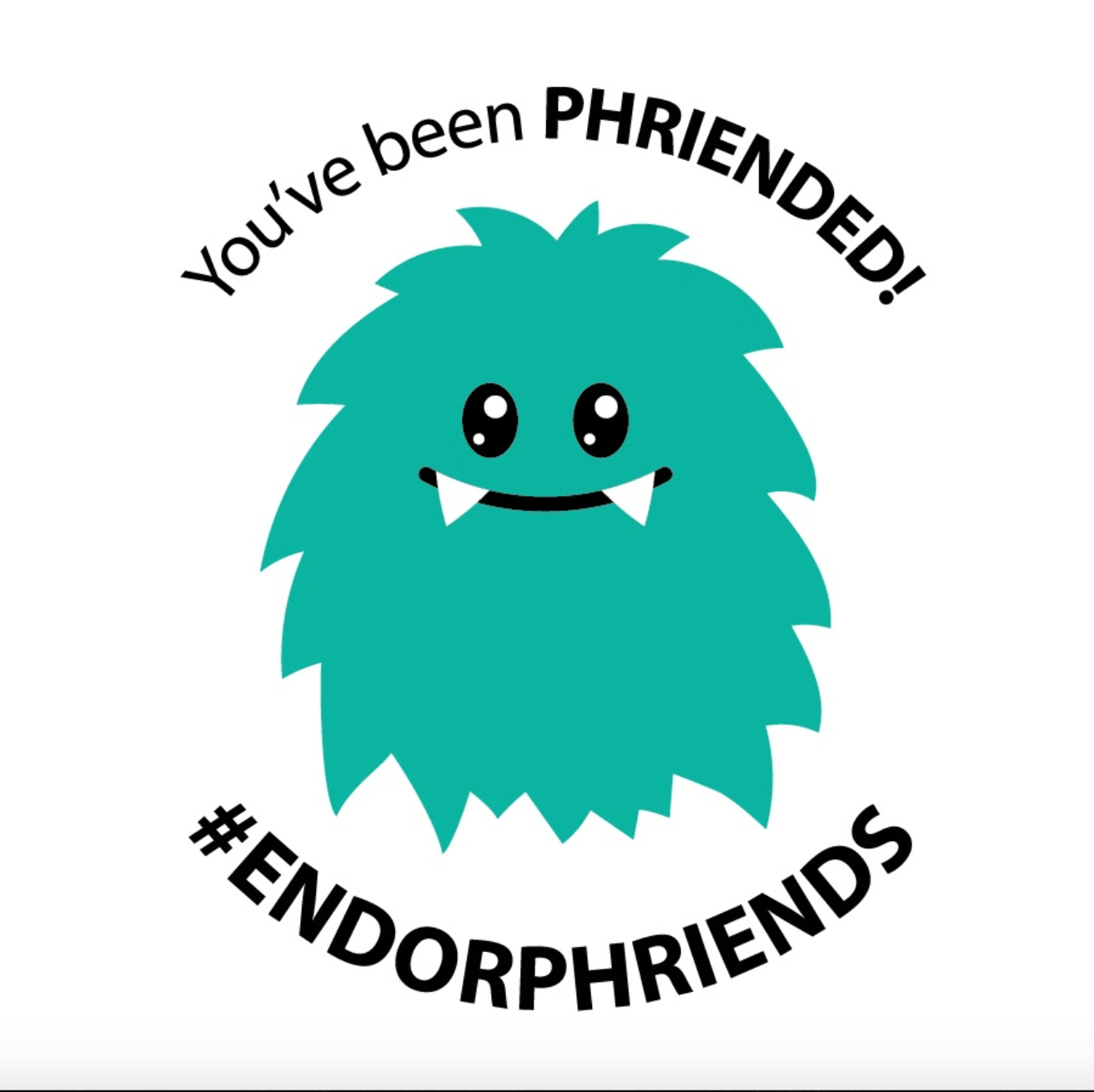 Shout out to Gawck for designing our logos!