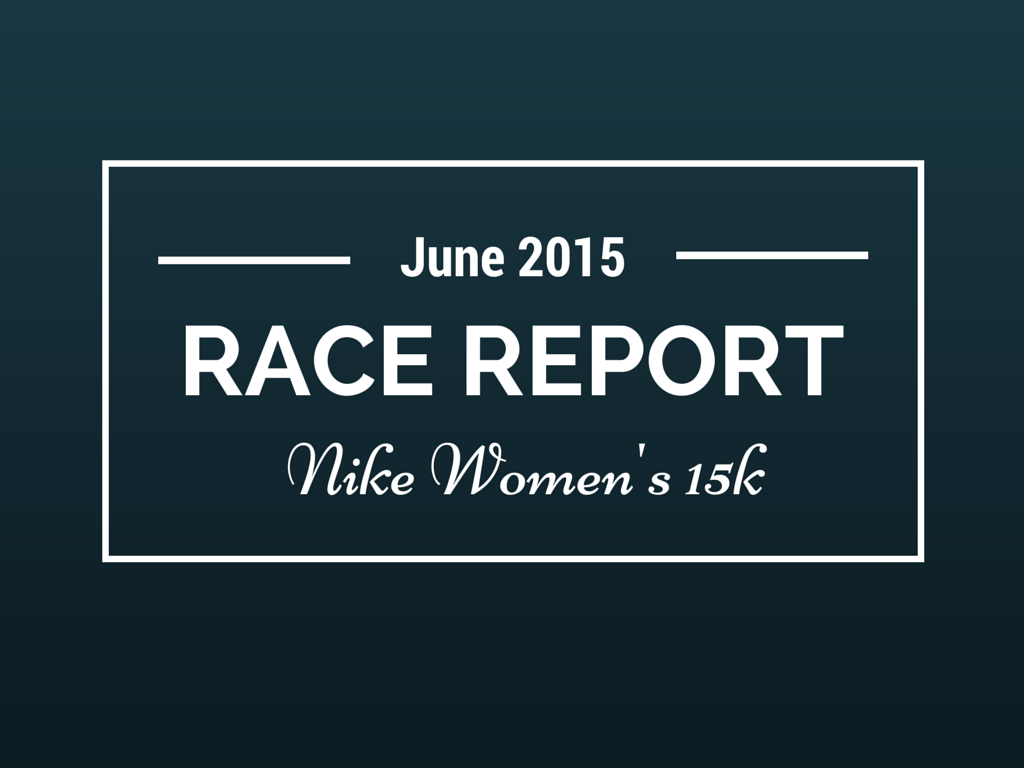 Going into this race, I had just come off an injury. I had just had painfree runs maybe 2-3 weeks ago so going into Nike Women’s 15K Toronto, I was not gunning for a PR. Instead, this run was all about enjoying myself and spending some quality time with my fellow run buds.

Um holy crap? I woke up at 5AM, got a ride down and reached the docks at 6:15AM, lined up for my 7AM ferry and got to the island shortly after. I was wave 4 and we left the corrals at 9:50AM so you could imagine how much time we had on our hands to kill…   So commence photo taking and peeing in all the pot-a-potties! (and I finally was able to meet some online friends in real life! ie Christina (aka The Athletarian), Athena, and many more! I’m a little sad I missed Rebecca though since she mentioned she was behind us for a stretch!) 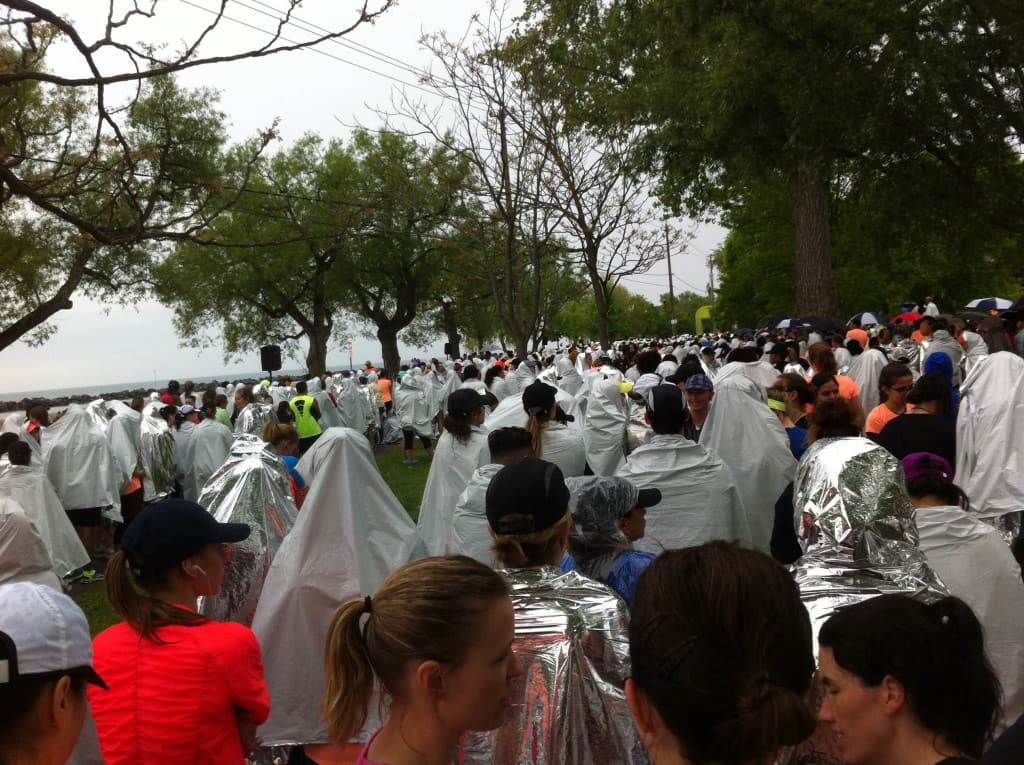 The weather was GORGEOUS until we went into the corrals… then it was ten thousand runners covering themselves with ponchos and heat sheets! 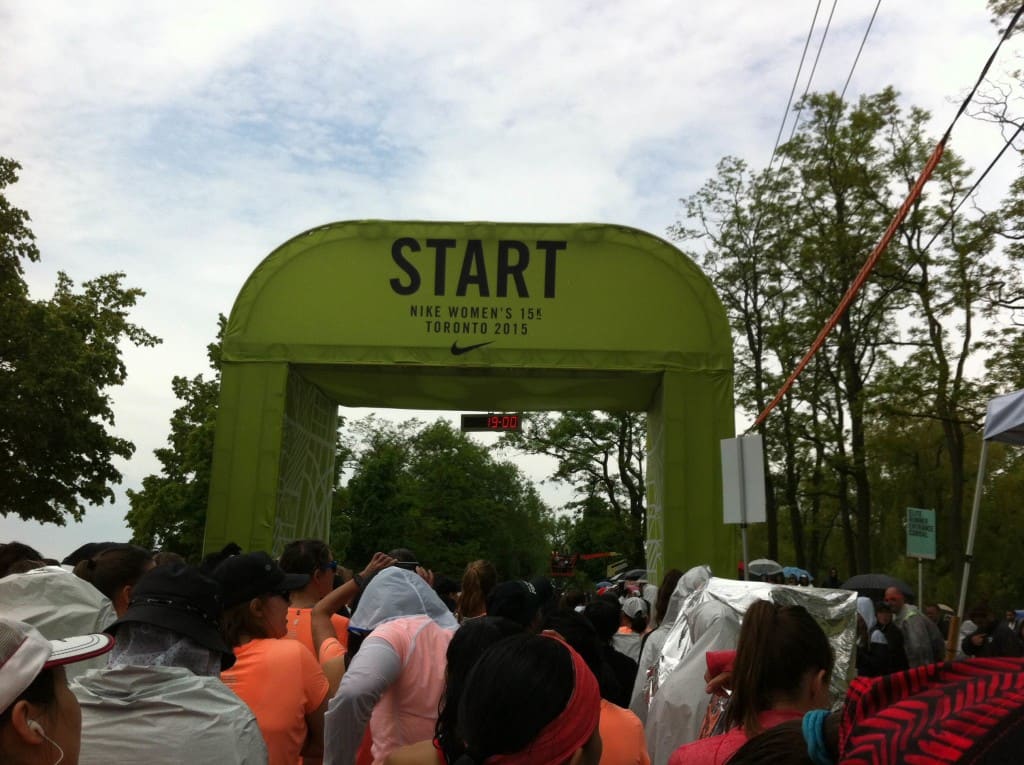 The vibe was upbeat (at least in my little circle of runners) as we danced around to the music for 15 minutes as the first 3 waves headed out. However, by the time wave 4 got to the front, the speakers stopped working! Super awkward but those closer to the front could still hear some from the booth directly. That bummed me out a little but hey, go with the flow right?

And we’re off! Girl with the pack is Cathy! Cathy, Crystal, Lisa, and I tried to stay together for as long as we could be soon we were separately from her ): 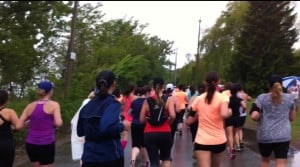 The first 5k were decent. Due to the recent rain, there were a lot of puddles that needed dodging but so far, our fears of bottlenecking were unfounded! The path was narrow but decent enough to get girls going two by two with room for passing.  The first 5k, I got to see the girls coming in from the turn around point up ahead.

It was honestly unreal – at the 4-5k mark, we were running on a runway at the Billy Bishop Toronto City Airport! We got to see a plane take off beside us as we ran by! My main struggle was the dirt path. The dirt was loose and digging in was very taxing on my calves. It was half cross country style, half road race! The grass was slippery and required way more energy. 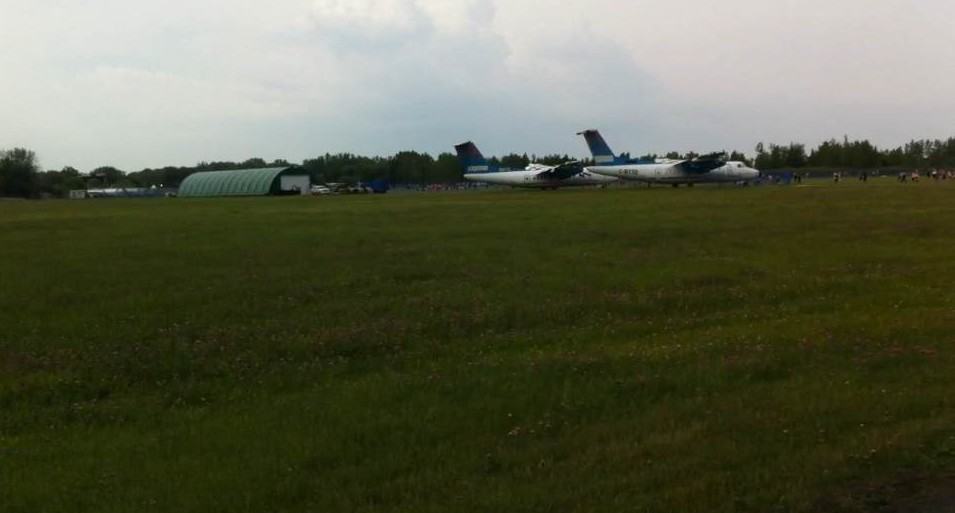 5-10k was a little unfortunate. I kept running funny because my toe was bothering me. By the 9k mark, I was hurting and soon after had to stop. Took off my shoe/sock to check it out and well, my toe was a wee bit bloody.  Panicked a little (huge thanks to Crystal and Lisa for staying with me!!!!!) put my sock back on and ran 5m because I just couldn’t run.  I ended up taking my sock off and running sockless so the sock couldn’t tug on my toenail anymore (rookie mistake – remember to trim your toenails folks!!). It was still bothering me but hey, power through right? Not the first time I had to power through and probably not the last!

The last 5K was pretty amazing (minus the toe thing….). Nike managed to get the residential area to allow us to run through so the residents were either out cheering, children giving out high fives, or watching us from the comfort of their porch! I’ve never seen that area before so it was nice to see their gorgeous homes and large gardens!

On top of that, the 13-14k mark was unreal. I’ve always wanted to run on the sea wall in Vancouver and well, this is pretty close!

We ran along their boardwalk and it was amazing being so close to the water.  Nike also put up posters on the edge with some motivation like how hard we worked to get to this point. Those small touches were great!

After the boardwalk, we were getting close to the end and honestly, I was ready for it to be done. We picked up the pace and by the last half k, I was sprinting (to the medic tent haha)!

It was a very interesting experience! I wasn’t much of a fan of the half country cross half road race style. We had to go through those stretches 2-3 times and it was quite slippery with the rain. The bottleneck worry that was on social media wasn’t too big of a concern during the race.  However, due to the rain, I was frozen and pretty much tried to leave the island right away (through no fault of Nike of course – Mother Nature just decided that rain was needed!).

My friend Melly and I walked 3k after to the Ward’s Island Ferry spot to try to avoid the large group we assumed would be racing to the Centre Island Ferry closer to the start/finish line.  We ended up waiting 30 minutes in the rain for the ferry and were quite miserable! There were concerns about how to get 10000 runners (and extra spectators!) off the island and at first, we were okay because the forecast originally said sun – so we could hang around and go to a later, emptier ferry, however the rain kind of ruined that.

I was pretty cold and was upset that they ran out of heat sheets at the finish line and it was pretty much treated as a free for all as ladies were running into the tent and grabbing what they could.

However, everything else such as baggage check was super well organized! I’m quite happy to have been able to be a Brand Ambassador for their first Toronto race in their Nike Women’s Series and wouldn’t trade the experience in for anything else! 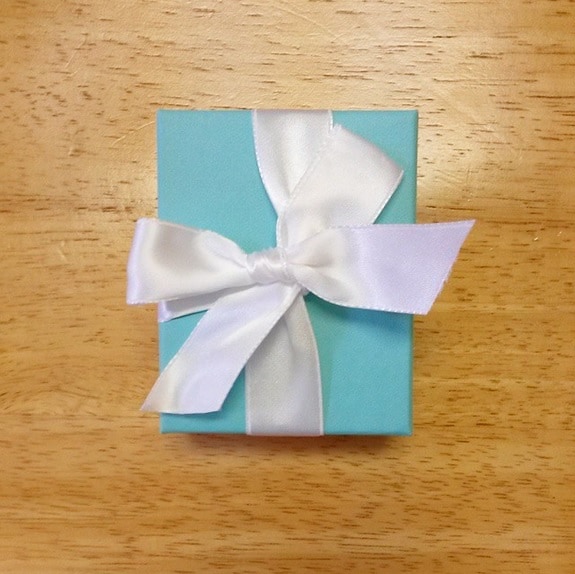 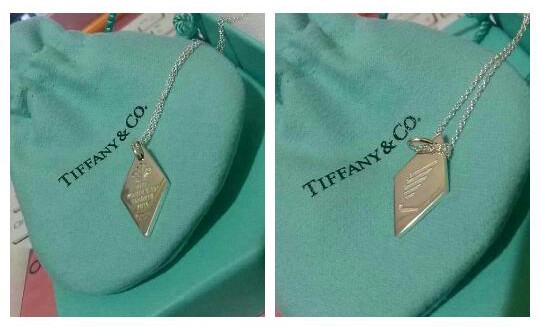 So were you one of the ten thousand of runners running on Centre Island for Nike Women’s 15K Toronto? Or were you running elsewhere? Let me know how it went!