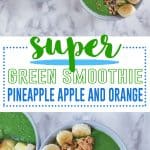 I call this smoothie the how many greens can Carmy stuff into the blender before it cannot handle anymore. But for realies – this green smoothie (aka Pineapple Apple and Orange Super Green Smoothie) is delicious and pretty much maxes out your daily greens requirement.

So after our gym session a week or so ago, I decided to try and teach H how to make his own green smoothie because I didn’t want to be the one making smoothies for the two of us all the time (and washing the blender). In theory, it was a good idea, teach him to make smoothies so he could make it for the two of us but that dream quickly ended when he asked if we should pick up condensed milk. Turns out for him milkshakes = smoothies, smoothies = milkshake. Yup. But I’m not one to give up easily! So after going “uhhhhhh no?” I sent him to go get the orange juice and while I picked the greens and we were on our way to making the green-y greeniest green smoothie.

After putting in everything he wanted in the smoothie and me sneaking in extra spinach into the blender when he was getting something else, we hit blend! It was starting to look and taste good but then H tasted it: it’s not sweet enough, we should add sugar! Hold up – no, nope, uh huh, no sugar in a green smoothie! At least not straight up white sugar from the jar! After convincing him to use additional fruit as an alternative, we were back on track to a delicious super green smoothie. 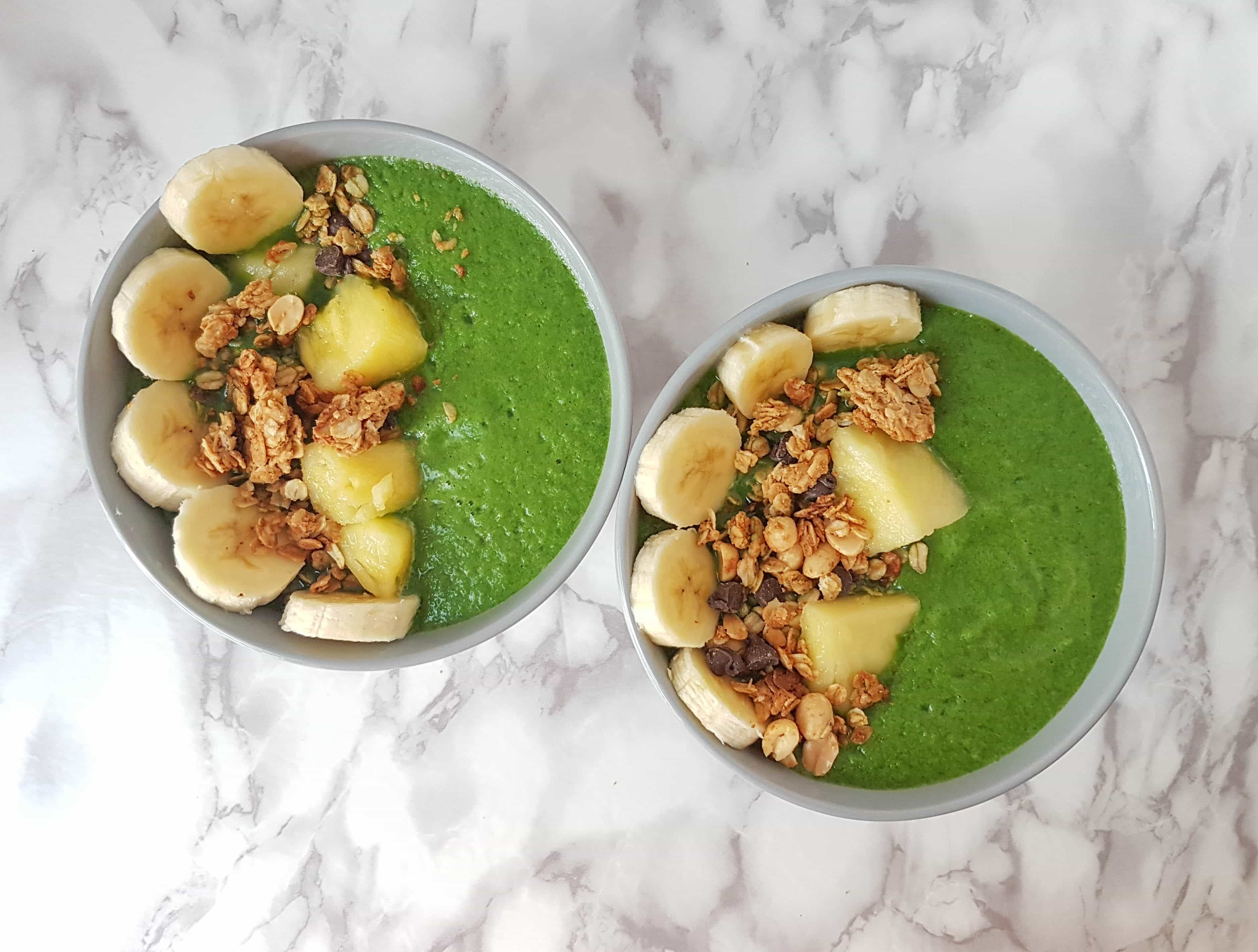 In the end, I would say we did pretty well. He ended up with a delicious smoothie that he will hopefully make again and not add white sugar to while I’m not around to stop it! The next morning, I grabbed some stuff we had left over and decided to put over twice the amount of greens into the blender and see if I could make a yummy super green smoothie bowl breakfast. This was more up my alley and H is always hesitant to add greens in but I was determined to make something that he could enjoy without realizing just how much greens he was consuming.

The result? He was surprised at the amount of greens I was actually able to fit into the bowl without the flavour being compromised! #win

So what was in my smoothie? See below for the recipe! 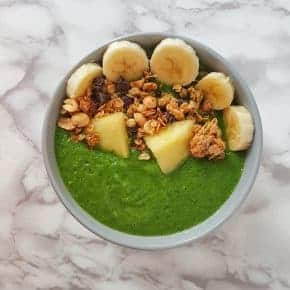 I call this smoothie the how many greens can Carmy stuff into the blender before it cannot handle anymore. This green smoothie is delicious and pretty much maxes out your daily greens requirement if you eat two servings.
No ratings yet
Print Rate
Prep Time: 10 mins
Total Time: 10 mins

I blend them separately as it is less time consuming and I have to spend less time opening the blending and poking down the ingredients! For this recipe, I put a few pieces of pineapples and some sliced banana in addition to my Peanut Butter Chocolate Granola for the toppings.
Tried this recipe?Did you make this recipe? I'm always so happy to hear about it! I'd love to see how it turned out. Tag me at @CarmysHungry on Instagram so I can see it! If you enjoyed the recipe, I'd really appreciate a comment with a 5 star rating! ♥
Authour: Carmy
Course: Breakfast

After uploading my smoothie bowl onto social media, a friend of mine asked why make a smoothie bowl over drinking a smoothie from a cup. While I like drinking smoothies from a cup for the sake of convenience, I love smoothie bowls as it is like eating cereal without the milk for me! I love adding toppings! I find that smoothies are practically a meal itself but if I drink it from a straw, my brain and stomach doesn’t believe it so I’m less “full” despite being full! So the act of chewing things like granola really helps! For this recipe, I used my Peanut Butter Chocolate Granola – if you’re a PB fan, you’ll love this granola!

QOTD: What are your favourite greens to put in a smoothie? 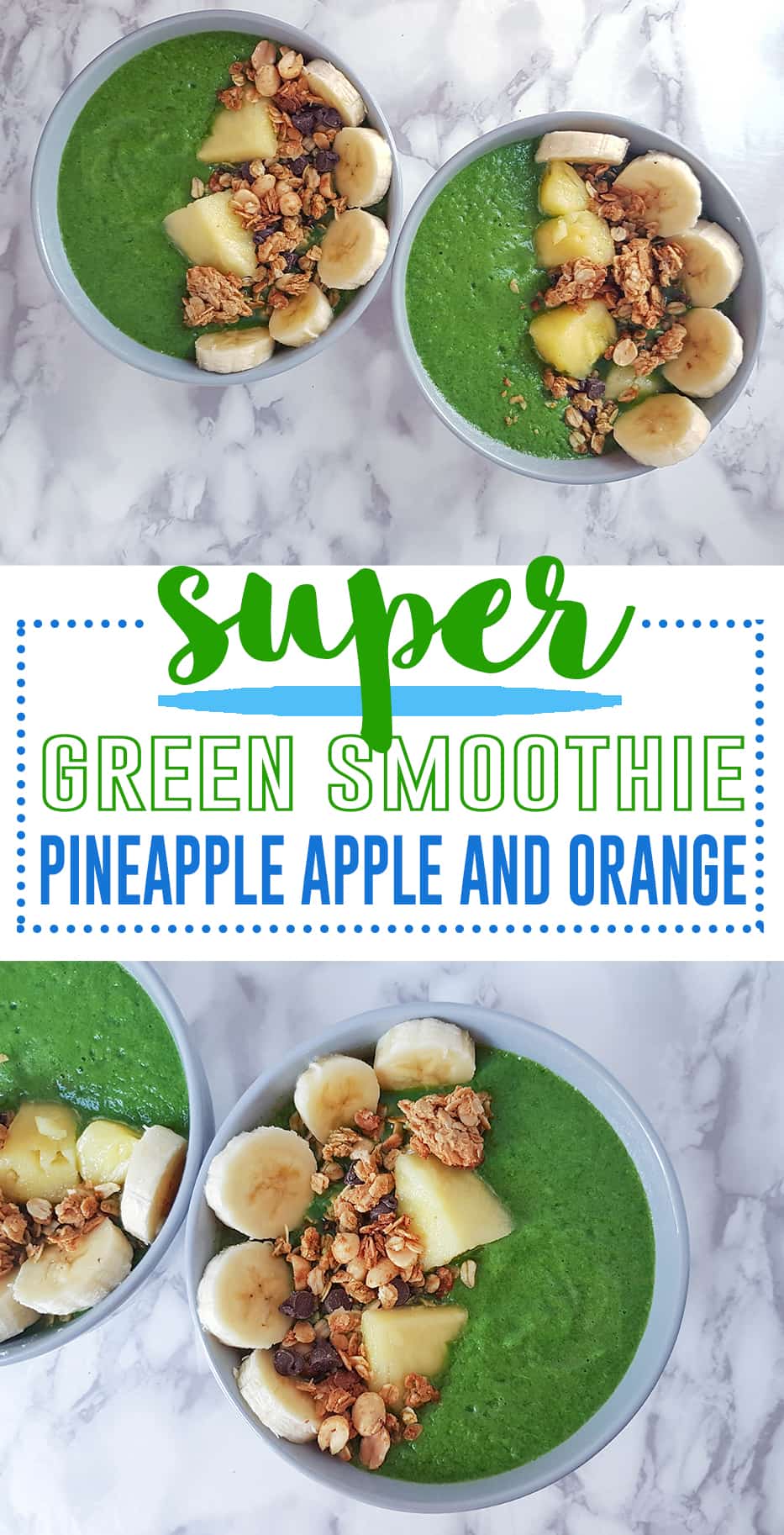 Other places to connect with me
@carmyshungry on Instagram
Facebook
Shop my Amazon faves
Email: [email protected]